With a former Masters champion and a former world No 1 in the reckoning, who would have thought it would be young Queenslander Cameron Smith who would finish top Australian at last weekend’s US Masters?

Yet Smith turned on the fireworks in the final day with a stunning final round 66 to surge up the leaderboard before eventually finishing in a tie for fifth, just six shots behind the winner Patrick Reed. 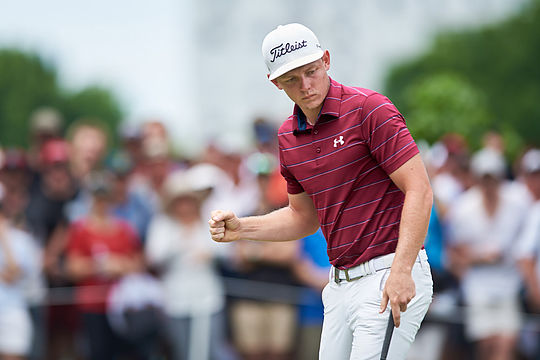 Indeed Smith and Victorian Marc Leishman finished up in the top 10 which was a mighty result for Australia’s four-man contingent.

It was just the second Masters for 24-year-old Smith.

Still you would never have guessed that if you watched him cruise through the back nine with six birdies, including four in a row from the 12th hole.

He hit it close again at the 18th and had a two-metre downhiller for a 29 on the back nine, which would have equalled the Augusta record for that famous stretch of holes.

The slick putt instead burned the hole on the left and Smith signed for a 66, which guaranteed him a spot in next year’s Masters as Augusta National automatically invites the top 12 players in its tournament to the next year’s event.

“There won’t be any stress leading into next year will there?” said Smith, who received an invitation a fortnight before the Masters.

“It will be nice coming back,” said Smith.

The Queenslander, who has previously finished fourth in a US Open, said he would take a lot from his week.

“To put myself into positions where I can win more and more, it should be getting close.”

Leishman also showed his mettle. He birdied four of the last five holes, including the 18th to shoot 70 and finish in ninth place.

Jason Day closed with a 71 to finish inside the top 20 while Adam Scott shot 70 to finish a disappointing 32nd overall.