Travis Smyth has won the Riversdale Cup winning on the first extra play-off hole against Lucas Herbert in Melbourne.

The duo finished at 8-under after Smyth forced the play-off with a birdie on the last hole following Herbert’s earlier bogey at the 18th.

Smyth closed this event out in style. Driving the 282 metre par 4, 18th to set up his closing birdie and then on the first play-off hole drove the right greenside trap before executing a superb bunker shot to set up a tap-in birdie.

In contrast, Herbert had had the wind taken from his sails over the closing stages of the round. He had started two behind Smyth and had gone out well moving to 3-under through seven holes to then fire three birdies through the 10th to 13th to keep the pace going.

Herbert looked to have one hand on the trophy going down the 18th yet fluffed his bunker shot, landing in the deep fringe rough and short sided to the pin. It was a devastating blow and bogey resulted. 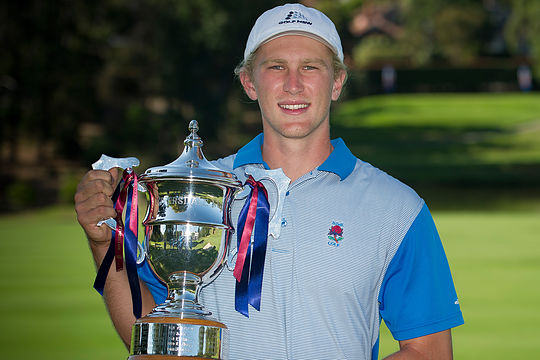 Herbert would finish with a final round 4-under 68, which was the equal second best round for the day with Ben Eccles shooting a 6-under 66 to take the day’s top honours to finish in a tie for 4th position with Ryan Ruffels and Taylor MacDonald.

Brett Coletta was in outright 3rd position at 5-under.

But when Herbert was not able to get up-and-down on the last his momentum was gone and he then made a mess of the first play-off hole after being unlucky with his drive finding thick fridge rough on a downslope before fluffing his chip into the greenside pot.

Yet full credit must go to Smyth who collected his second main amateur title having won the 2014 Queensland Amateur.

Smyth had fired a third round 4-under-par 68 to sit at 6-under to take a one stroke lead over Taylor MacDonald heading into the final round.

Smyth’s final round 2-under-par 70 included four birdies and two bogeys. But it was the manner in which Smyth was able to close the event out that got him the result.

“I’m just stoked with the way that I finished,” said Smyth.

“I’ve been working hard with my coach John Sherhan back at St Michael’s and the hard work has paid off.”

“All week I executed the shots I wanted, was able to keep the ball in play, it just all clicked. I’m stoked, that’s all I can say.”

This is a title steeped in tradition and this week’s field included nine of Australia’s top-10 players who dearly wanted the silverware. Smyth proved he’s up there with the best and this was a victory richly deserved for the Wollongong native.