Travis Smyth fired a third round 4-under-par 68 to sit at 6-under and one stroke ahead of Taylor MacDonald heading into the final round of the Riversdale Cup in Melbourne.

Smyth opened the tournament with rounds of 70-72 during difficult conditions yet came out all guns firing today closing with a back nine 32 which included four birdies after opening with 36. 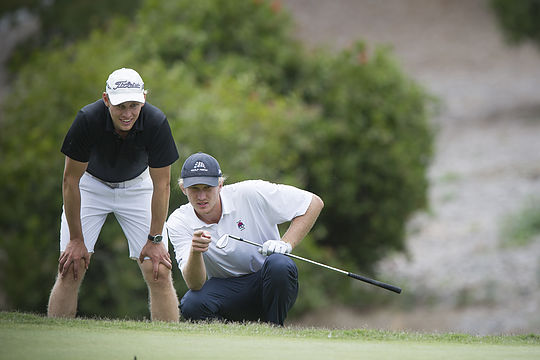 Travis Smyth will take a stroke lead over Taylor MacDonald into the final round of the Riversdale Cup in Melbourne (Photo: Anthony Powter)

MacDonald had enjoyed the overnight lead at 5-under yet closing bogeys on the 16th and 17th today saw him close with a third round 72. MacDonald is a tenacious competitor and certainly should not be discounted tomorrow, nor should Herbert. Both will push Smyth to the wire, yet that’s exactly what final day golf is about.

DJ Loypur is currently in a tie for third position with Lucas Herbert at 4-under, just two from Smyth.

Nicholas Coxon, Cameron John and Jack Williams share 5th position at 2-under, with Bret Coletta a stroke behind at 1-under along with Thomas Power Horan and David Micheluzzi.

Smyth plays out of the St Michael’s Golf Club in Sydney under the watchful eye of John Sherhan. Last year he won the Queensland Amateur to secure his breakthrough amateur title and has since recorded a string of top-10 finishes both on the Australasian Tour at the NSW PGA and NSW Open.

On the amateur front, Smyth has also recorded top-10 results at the Federal and Lake Macquarie Amateurs.

But with Herbert and MacDonald well within striking distance of Smyth and an in-form DJ Loypur, with two top-3 results already this year at the Tasmanian Open and Boroondara Cup, tomorrow’s final round is shaping to be another classic finish at Riversdale.