American Brandt Snedeker sensationally holed a 20-foot closing hole birdie to join one of the more exclusive clubs in golf in posting a sizzling 11-under 59 on day one of the Wyndham Championship in Greensboro, North Carolina.

Snedeker, 37, commenced his round with a 10th hole bogey and then cut a swathe through the field with an eagle and 10 birdies from his fourth to 16th holes.

But the eight-time Tour winner, who captured his maiden Tour title at the 2007 Wyndham Championship at Forest Oaks, nervously missed a birdie putt from six feet at his 17th before the excitement of seeing his 59th shot in the $6m event drop at the last.

“To have that putt on the last hole and to know what you are trying to do and that is to step-up there and have a 20-footer and know what it means as I was very aware what was going on, so to knock that putt in was very special,” he said.

“Now to know that I am part of a very small club on Tour, and not many people have done this is a really cool feeling right now.” 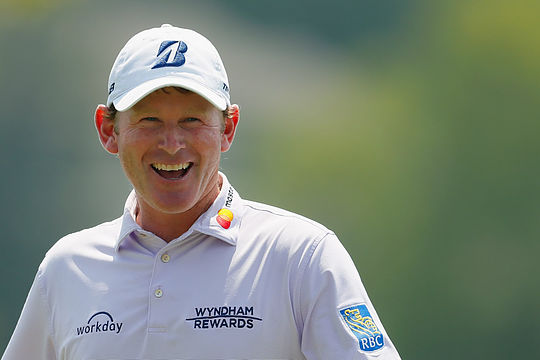 “But after missing the birdie putt on my 17th I had thought there goes my chance to tie Jim Furyk in shooting a 58 so to make that putt on the 18 was very exciting and this is what we play for.”

“There was no way I saw this 59 coming but luckily everything clicked today and to do it here and where I won my first PGA Tour and with Wyndham being my long-term sponsor is pretty nice.”

One of Snedeker’s historic-making shots included ‘slam-dunking’ his second shot for an eagle at the uphill par-4 sixth hole that he was playing as his 15th.

Snedeker’s 176 yard shot severely damaged the hole and officials took the unusual step of cutting a new one a couple of feet away.

Masters winner, Sergio Garcia was the leading European in a 12-way tie for 20th place after birdieing four of his closing nine holes in a round of 66.

USA Ryder Cup captain, Jim Furyk holds the all-time Tour low of a 58 on the final day of the 2016 Travelers Championship while Furyk has also shot a 59.

The full list of Tour players to break 60 include:-