In a promoter’s dream, the three highest ranked players in the field – Park, Ryu and Norwegian Suzann Pettersen – thrilled the crowds by contending for the title however it was Ryu who stood tallest. 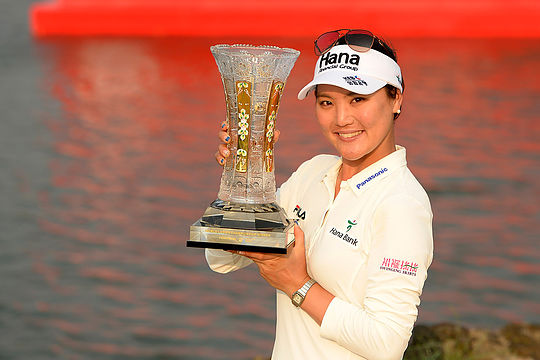 The world number eight was outstanding over the weekend with rounds of 65-69 on the par-73 Blackstone layout to finish at 13-under and a stroke ahead of Park in the end.

“I didn’t expect that I had a chance to win this tournament, because in the second and first rounds, I didn’t play really well,” Ryu said. “Fortunately I was able to shoot eight-under in the third round so after that I was in contention.”

“I’m really proud of myself, because it’s good to be back in contention and our group was exciting, with Inbee and Suzann. It was good to play with Inbee, my best friend on the tour. She is not number one right now, but I believe she is the true number one, so it was great to compete with her.”

After a rocky start to her final round, where Ryu quite literally strayed onto black lava rocks on the 7th and took a double-bogey after an unplayable lie, she caught fire with three birdies in four holes from the 9th to claim the lead over Park.

Park birdied the 16th to tie the lead before Ryu edged ahead again with a birdie on 17. Both faced birdie attempts on the 18th but could not convert, with Ryu tapping in from short distance for the win.

“It was a consistent day today but my putts wouldn’t drop into the hole,” Park said after the round.

“It was really just the putting that was the only problem and So Yeon played well. Even with the double bogey, she played really well and I’m really happy for her.”

“If I didn’t win, I kind of hoped that she would win, so it’s kind of good that my best friend won the tournament and I’m ready to congratulate her.”

Pettersen and China’s Xiyu Lin shared third place on 10-under par while NSW’s Rebecca Artis had her first top-ten of the Ladies European Tour season with a solid eighth place finish at 5-under.

The Ladies European Tour takes a week’s break before resuming in Morocco, for the Lalla Meryem Cup in Agadir from March 26-29.