Korea’s Younghan Song survived a ‘crazy’ sleepless night by fending off the spirited challenge of world number one Jordan Spieth to win the US$1 million SMBC Singapore Open by one-shot on Monday.

Inclement weather had caused multiple delays during the week, forcing the Singapore showpiece into a Monday finish at the Sentosa Golf Club.

Song was left to ponder about his crucial par save on 16 overnight as his charge towards the prestigious title was halted when the sirens blew to signal the suspension of play on Sunday afternoon.

“That one night felt like a week! It was crazy. I couldn’t sleep and I was constantly thinking about putting throughout the night,” said Song.

The Korean bravely holed his putt when play resumed at 7.30am before going on to close his finishing two holes with pars and sign off with a one-under-par 70.

Song’s winning total of 12-under-par 272 was also just enough to pip Spieth to the title and avoid a potential play-off with the Texan, who had earlier sunk a tricky birdie putt on 18. 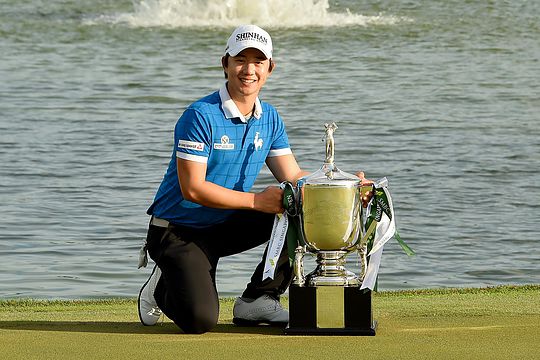 “I read the line well on 16 and just maintained my composure on 17 and 18. I knew the title was for me to lose as long as I don’t make any silly mistakes.”

“Looking back, I think the suspension helped as the winds were starting to blow hard yesterday and that might have made a difference,” said Song.

Spieth did not disappoint the early morning crowd when he sunk his birdie putt on 18 to pile the pressure on Song, who still had two holes left to play.

“I went to the putting green to practice early in the morning as I knew I had to get that birdie to force a play-off.”

“It was nerve-racking and I was happy I managed to stroke the ball well and it went in. I made some poor decisions in the middle two rounds as I was trying to do a little too much. But overall, it has been a great experience and I had a really good time here,” said Spieth.

Sydney’s Won Joon Lee claimed the top spot of the Australian field this week finishing with 1-under 70 and tied for 8th. Sam Brazel was another stroke back on 6-under and T11.