The second round of the Australian Master of the Amateurs being held on the East Course at The Royal Melbourne Golf Club has seen a change in the Women’s leaderboard with Julienne Soo making a birdie putt on the 18th to fire an even par 71 after opening with a 74 to be at 3-over-par and a stroke ahead of first round leader, Robyn Choi.

Soo, who is a junior at Oklahoma University in the US collegiate system, put on a solid display of precision driving and iron play, storming home over the back nine on the East Course in 2-under to snatch the lead on the 18th.

It was the momentum changer Soo was needing and it will give her plenty of confidence heading in to the final two rounds of this tournament.

In the men’s championship, local member Darcy Brereton fired a second round 3-under par 68 to build on his opening round of 66 to be at 8-under, six strokes ahead of his nearest rival American Canon Claycomb.

Brereton is taking full advantage of his local knowledge of the East Course at Royal Melbourne as he widens his lead in this tournament, Australia’s highest ranked amateur championship. 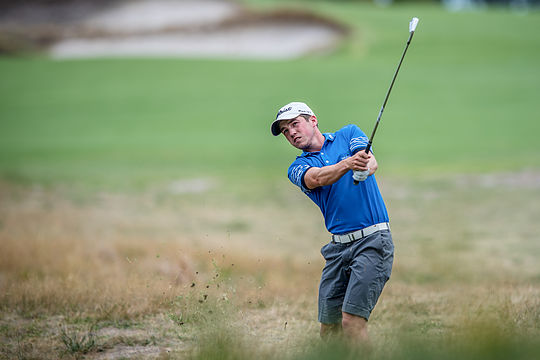 If there has been a standout feature with Brereton’s impressive game over the first two rounds, it has been his reading of the greens. Brereton made numerous clutch par putts and continues to roll the ball beautifully to keep his distance from the rest of this international field.

With two rounds remaining, he is in the box seat and now the rest of the field will be trying to catch the local, who continues to play majestic golf on his home layout.