Sorenstam cruises to 8-shot win in US Senior Open

Annika Sorenstam has won the US Senior Women’s Open in her championship debut after closing with a 4-under-par 68 to post an eight-stroke victory over Liselotte Neumann at Brooklawn Country Club.

With the victory, the 50-year-old gains entry into the 2022 US Women’s Open at Pine Needles Lodge & Golf Club and an exemption into the US Senior Women’s Open through to the age of 65. The victory also earned Sorenstam US$180,000.

“It’s really hard to describe,” said Sorenstam of winning her fourth USGA championship, after US Women’s Open victories in 1995, 1996 and 2006.

“When we came here, I just loved the place from the start. Everything felt so good, and then obviously you have to go out there and finish it up, and today I really felt like I played very, very well. To come in here on Sunday knowing what I had to do and I did it, obviously I’m very happy.”

Neumann trailed by just two shots at the start of the final round and cut into the deficit when she made an eagle on the par-5 first hole. But Sorenstam made birdie to keep the lead and continued her momentum to close out the championship easily. 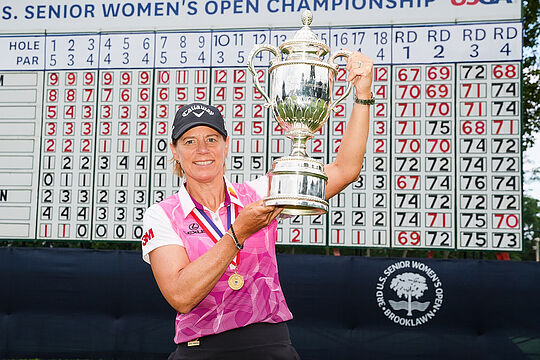 Back-to-back birdies on the par-5 seventh and eighth holes, along with some bogeys from Neumann let Sorenstam move the lead to no closer than five shots.

For the week, Sorenstam made 18 birdies, leading that category but only by two over Neumann, Davies and Michele Redman. She made just six bogeys on the challenging layout.

It was her first time Sorenstam has competed in an USGA championship since 2008, when she retired at the top of her game to raise a family.

Victorian amateur Sue Wooster was the only Australian to make the cut finishing in 47th place at 16-over. Jan Stephenson carded rounds of 78 and 80 to miss the cut.