South African Branden Grace shot a 3-under-par 69 at Carnoustie Golf Club on Saturday for a 4-stroke lead entering the final round of the Alfred Dunhill Links Championship in Scotland.

Grace, who will seek his fourth European Tour win of the season on Sunday, has led after all three rounds of the event following a course-record 12-under-par 60 at Kingsbarns on Thursday before staying on top with a second-round 67 at St. Andrews. 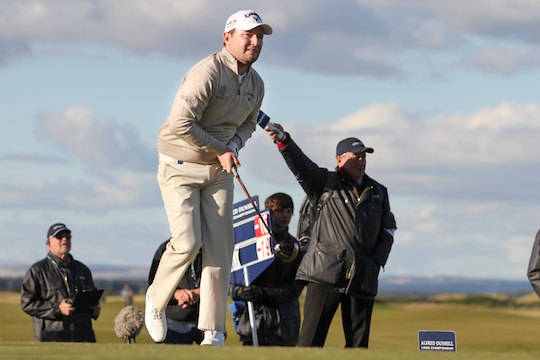 Thorbjorn Olesen is in second place for the second consecutive day after carding a 68 at Kingsbarns, while Alexander Noren (65) and Fredrik Andersson Hed (66) are tied for third at 15-under.

The best of the Australians is Ashley Hall at 10-under-par in a tie for 13th position.

One of the talking points in St Andrews was Michael Phelps – the most decorated Olympian of all time with 18 swimming golds to his name – proved he’s also a pretty handy golfer too.

Playing with former Ryder Cup player Paul Casey, the American holed a monster putt from over 50 yards in the Dunhill Links Championship at Kingsbarns in Scotland on Friday.

Phelps’ brilliant putt took a full 17 seconds to drop with the American commenting, ‘that was pretty easy’.