South Africa’s Ashleigh Buhai has overcome a nightmarish final round to somehow carve out her first major title and match childhood heroes and fellow South Africans, Gary Player and Ernie Els, with victory at Muirfield on Sunday.

Buhai came into the final day with a five-stroke lead following earlier rounds of 65 and 64 on Friday and Saturday and looked set to run away with the title. However, the golfing gods had other ideas with a triple-bogey at the par-4 15th seeing the 33-year-old open the door to those behind her.

Despite several players coming close, including Australia’s Minjee Lee, it was South Korea’s In Gee Chun, who managed to hold on long enough to force the playoff. And what a battle it was.

As the light began to fade across the historic course, both players parred the first sudden death playoff hole before each notching up bogeys at the second and pars at the third.

On the fourth attempt at the 18th hole, both Buhai and Chun found the sand on the way to the green but it was the South African who was able to pull off the type of shot needed to win a major championship and left herself with a winning putt from just under a metre for par and the Women’s British Open title. 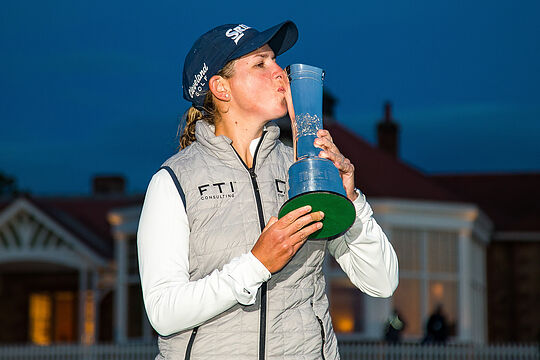 It was an incredible end to the tournament and one befitting of a major championship where every single shot counts and anything can, and does, happen.

“I can’t really put this into words,” said Buhai following her heart-stopping win. “This is the result of many years of hard work. And I’m sure there are many people in South Africa right now with more grey hairs after watching me on that 15th hole.”

“I love this course though. It’s a true test. My caddie, Tanya, gave me the confidence for the bunker shot on the last hole. She told me to show everyone why I’m No. 1 in bunkers. And now I’m a major champion. It’s life-changing.”

Minjee Lee impressed again finishing in a share of fourth place on 7-under and just three shots outside of the playoff. The top-5 result was enough to earn her the Rolex ANNIKA Major Award, which is given to the player who has the most outstanding record in all five LPGA major championships each year.

Steph Kyriacou was next best of the Australians in a share of 7th for her second top-10 in the majors in her rookie LPGA season.

Hannah Green shared 35th, Whitney Hillier tied for 48 while Su Oh sat out the weekend after posting a 10-over total.