Australia finished a distant second and were left to rue too many missed putts that cost them any hope of catching the runaway South Koreans in the Queen Sirikit Cup at South Australia’s Glenelg course.

There was little that Australia’s team of Doey Choi, Steph Kyriacou and Julienne Soo could do to make up the leeway. 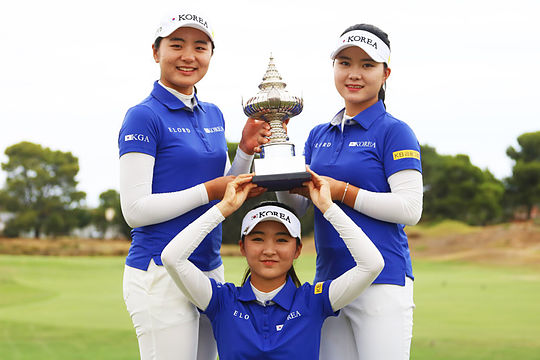 They still played some of their best golf of the week on the third and final day to finish with a combined one-under-par total, albeit it a massive 16 shots behind the runaway Koreans, who finished 17-under-par after 54 holes.

Australia had to settle for the silver medal, ahead of nearest rivals China (two-over) and Thailand (three-over).

“We’re happy to come second, but you have to be honest and say we were a long way behind Korea,” said Kyriacou, who carded the final round’s best score of four-under-par 69.

“We have done really well as a team and the girls played well, but it shows we still have a lot of work to do to catch them [Korea].”

Kyriacou, 18, impressed in finishing fifth individually at one-under-par after the three rounds.

Her nine birdies and two eagles for the week showed the St Michael’s [Sydney] member was more than capable of taking her golf game to the next level.

“If I can get rid of a couple of the rough holes, I’ll be happier,” she said.

Concord [Sydney] golfer Choi, 19, gave herself some great chances to score better than her 74 but couldn’t hole a series of birdie putts.

“My short game has been great all week – I just couldn’t make those putts today,” she said.

“Still, we’ve had a great week as a team and I’ve really enjoyed myself.”

Soo, 21, didn’t enjoy her finest week, but the Victorian fought back with a stoic 78 on the final day, which included two double-bogeys.

“Sometimes you just don’t have your best (game),” she said.

“It was a great learning experience and great to be part of an Australian team.”