South Korea’s K.H. Lee secured his first PGA Tour victory winning the AT&T Byron Nelson and in the process booked his spot in this week’s PGA Championship at Kiawah Island in South Carolina.

Lee finished at 25-under for a three shot win over third round leader, American Sam Burns who was in outright second position a shot ahead of string of players including 2011 Masters champion Charl Schwartzel, Daniel Berger, Patton Kizzire and Scott Stallings.

In a tournament delayed by poor weather, players late in the final round had to be evacuated from TPC Craig Ranch for more than two hours before play resumed.

“Yeah, when I rain delay my goal is no look at leaderboard,” said Lee. “I don’t want to too much pressure myself, so just relax and try my shots, and then some joking in the clubhouse.”

“I just try to keep patient and think positive. I don’t want to look at the leaderboard, just try my golf. I’m very excited and happy.”

It was Lee’s 23rd start of the season from which he had made 14 cuts. Lee has one other top-10 finish this season, when he finished runner-up at the Waste Management Phoenix Open in February. He became the eighth player from South Korea to win on the PGA Tour and leaps from 84th to 29th on the FedExCup standings, the biggest move of the week. 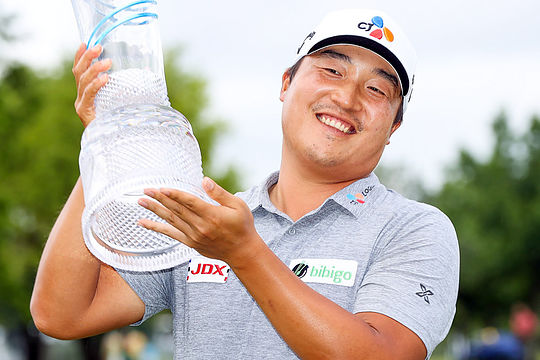 Lee moved to the United States in 2016 to play the Web.com Tour, after finishing 8th in the Web.com Tour qualifying tournament. His best result was 4th at the WinCo Foods Portland Open.

Marc Leishman finished the best of the Australians in a share of 21st position with a closing 70 dropping him three places from his third round position. Cameron Percy was the only other Aussie to make the weekend, eventually finishing in 70th position.

Kiawah Island’s Ocean Course is one of the toughest PGA Tour layouts and is the scene of this week’s PGA Championship return, having last hosted the championship in 2012. Rory McIlroy won the title that year and enters the week as one of the favourites, along with Jon Rahm and Bryson DeChambeau.