Rafa Cabrera Bello made it back to back Spanish victories on the European Tour in birdieing the first extra play off hole to win the Scottish Open at Dundonald Links.

Cabrera Bello, 33, birdied his closing two holes in a course record 8-under 64 before being joined on 13-under by England’s Callum Shinkwin, who missed a tournament winning par putt on the last hole in regulation following his round of 68. 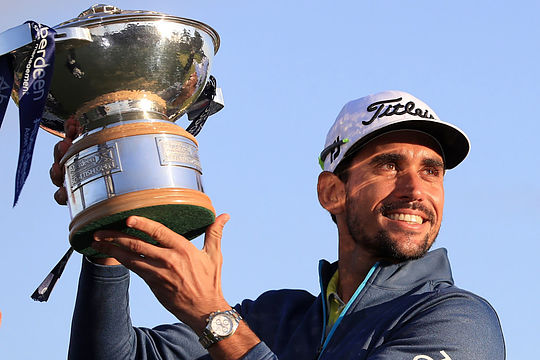 The Dubai-based Cabrera Bello then found the par five 18th green, and the first extra hole in two and then two-putted for birdie after Shinkwin made par.

The win is Cabrera Bello’s third Tour victory although his first in five years while he earned a first prize cheque of US$1.66m.

“I am extremely happy”, he said. “I’ve won before and I have been up there so many, many times, and things not really working out for myself. I was starting to feel a little of pressure every time I was up there contending.”

“So, really, really happy how I played today. I mean, in the playoff, I really gave it a go and extremely pleased it worked out for me.”

Shinkwin’s disappointment was eased by earning a place in this week’s Open along with a prize cheque for US$600,000 along with the assurance of securing his Tour card for next year.

“It’s been a very good week and at the end of the day, I’ll be more than happy to finish second but the win was on my mind and didn’t happen,” he said.

“So, this result is massively important for me not only to be in The Open but hopefully later in the year I will qualify for the Race to Dubai finals.”

Frenchman Matthieu Pavon (66) finished third on 10-under par to secure the second of three spots into The Open, and in what will be his first Major for the 24 year old Toulouse born golfer and just halfway through his rookie European Tour season.

And Queenslander Andrew Dodt, who was planning to travel with his wife to New York on Monday for a five-day holiday, secured the third Royal Birkdale place and his first appearance in a Major after shooting a final round 73 ending to finish in a five way share of fourth at eight under.

“Yeah, tomorrow morning we were meant to be off to New York, but pretty happy to be going to Birkdale and my first Major,” he said.

“So, I am over the moon. Over the moon. It’s been a big goal of mine sort of the back end of last year and this year to play my first major, and yeah, next week, bring it on.”

Sam Brazel, Adam Scott and Jason Scrivener all finished in a tie for 35th place at 2-under.