American J.J. Spaun denied Australian Matt Jones victory on the PGA Tour last Sunday firing a final round 69 to win the Valero Texas Open. It was the first win of his career in 147 starts and earned him the final spot in the field at the Masters this week.

Jones fired rounds of 68-75-68 before carding a final round 66 which moved him 19 places up the leaderboard to record his best finish on the PGA Tour so far this season which adds to a third place finish at the Sentry Tournament of Champions.

Jones finished in a share of second with Matt Kuchar, two strokes behind Spaun.

Spaun entered Sunday tied for the lead at 10-under along with Brandt Snedeker, Beau Hossler and Dylan Frittelli. Spaun got off to a terrible start after making a double bogey on the opening hole but rebounded with three birdies on his last four holes on the front side and continued the momentum with a pair of birdies in his first five holes on the back nine to secure the victory.

“It’s a great feeling to be in the winner’s circle, and now it’s like a game changer,” said Spaun. “I don’t know. It’s just perseverance. Just trying to push through and stay strong.”

Spaun also became the first player to endure a double bogey on the first hole Sunday and proceed to win on the PGA Tour since Tiger Woods at the 2008 US Open.

“A year ago, to even be on Tour, I would have been telling you I would have had to do a lot to get there,” remarked Spaun who has experienced medical issues with diabetes. “To be here and to overcome a lot of things and finally get a win, man, that’s — it’s everything you dream of.” 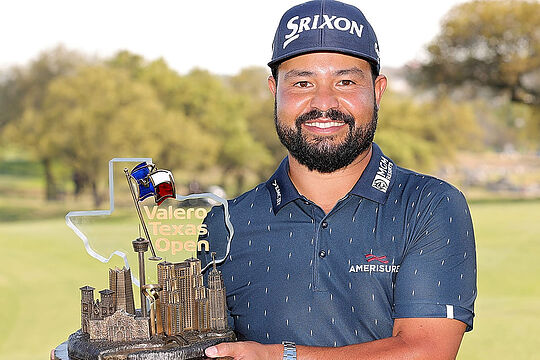 His previous best finish on tour was runner-up in 2018 at the RSM Classic. Sunday’s tournament win includes a US$1.54 million check and a start this week at the Masters where he will make his first appearance and fourth major championship start overall.

Spaun has five top-25 finishes this season and he has made the cut in 13 of his 17 starts. Spaun’s best finish came with a T7 run at the Butterfield Bermuda Championship last September.

Aaron Baddeley was the next best Aussie finishing in a share of 18th position. Jason Day and Min Woo Lee missed the 1-under-par cut.