Spieth back in the winner’s circle at Texas Open

It’s hard to believe former World No.1 Jordan Spieth had gone almost four years and 82 events without a win but that’s exactly what happened to the three-time major champion following his triumphant British Open win at Royal Birkdale in July 2017.

And now the Texan has secured victory in the best way possible on home soil with a 6-under 66 to hold off 44-year-old Charley Hoffman for a two-shot win on 18-under at the Valero Texas Open in Austin.

The result wasn’t out of the blue. In recent months things looked to be turning around for the 27-year-old with a string of top-10 finishes replacing the middling results and missed cuts that littered his early season numbers.

“I’ve had a chance on Sundays three or four different times in the last two months, and today was by far the best that I played,” said Spieth, who finished T4 at both the Arnold Palmer and Phoenix Open along with a 3rd place at the AT&T Pebble Beach.

“Just to see those putts go in, I felt like I was doing everything right those other Sundays and I hit good putts and they wouldn’t go in. Today I hit a couple that I didn’t quite strike very well but they went in.” 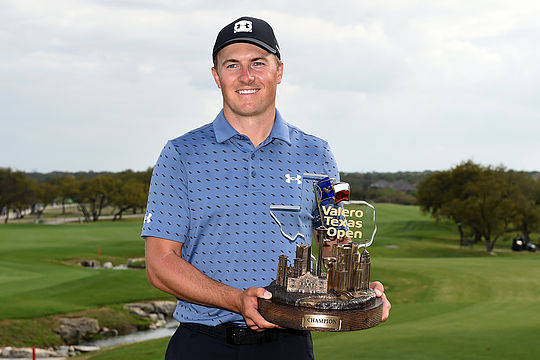 Despite the enormity of the situation and the relentless pressure from Hoffman’s back-nine birdies, he remained calm and was able to hold off the veteran with a chip to inside five feet to set up birdie at the 17th before closing out with par on the final hole for his 12th PGA Tour title.

“There’s peaks and valleys in this sport, but I never expected to go this long,” Spieth told the PGATour.com. “Back then, in between wins, maybe I took things more for granted than I should have. It’s very difficult to win out here and I’ll certainly enjoy this one as much as I have any other.”

What’s In The Bag: Jordan Spieth

Overnight co-leader Matt Wallace slipped into third place following a final round 70 while Lucas Glover and Anirban Lahiri rounded out the top-5.

Cameron Davis was the lone Aussie to make the cut slipping into a share of 69th with rounds of 73 and 76. Rhein Gibson and Cameron Percy sat out the weekend. Percy was disqualified for just the second time in his career after signing an incorrect scorecard.

The eyes of the golfing world now turn to Augusta National where World No.1 Dustin Johnson will defend the title he has only held for some four months after the event was postponed until mid-November due to COVID-19.

The obvious question now is what next for Spieth as he already has one green jacket to his name from 2015 and went T2, 1, T2 in his first three visits to Georgia. He will surely enter the tournament as a favourite but it seems unlikely with so long on the sidelines that he could summon up another green jacket just a week after his first win in four years.

But this is a man with four top-3 finishes in seven attempts so anything is possible.