Spieth calls on manager to caddy in Singapore Open

An injury that grounded his regular caddy forced World No. 1 Jordan Spieth to call on his manager to carry the clubs on the opening day of the Singapore Open.

Spieth and fellow Texan-born Jay Danzl combined for Spieth to shoot a four under par 67 in sauna-like conditions on the Sentosa course. 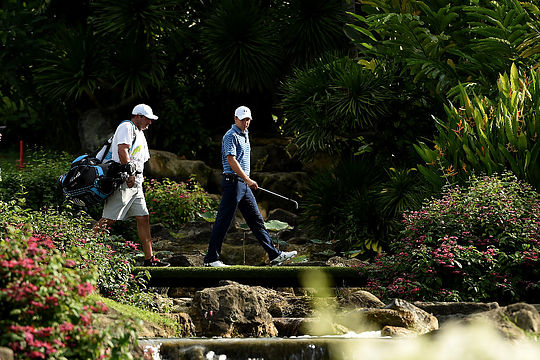 Jordan Spieth and temporary caddy Jay Danzl during round one of the Singapore Open (Credit: Asian Tour)

It left the four-time Major winning trailing just one shot behind South African Keith Horne who carded a five under par 66.

Spieth is believed to have been paid $US3m in appearance fee to compete on the island nation and he didn’t disappoint with a bogey-free round.

However most interest was in the decision to call on Danzl to carry the club while regular bagman Michael Greller having injured his knee while caddying last week in Abu Dhabi.

“I think Jay stepped in extremely well and it’s a tough place to come in and caddie when you’re not used to carrying the bag, with the weather,” said Spieth.

“But he took it like a champ and he’s caddied for me before, he’s caddied at the Dunlop Phoenix in Japan so at least we have some rounds under our belt and we’ve played a lot together so it’s an easy one week replacement while Michael’s getting healthy.”

Spieth is competing in Singapore for the first time in his career and in what has been a whirlwind two months for the American having travelled from Shanghai late last year to Sydney, and then onto the Bahamas.

The American then won in Hawaii in the first week of this month before then travelling last week to the UAE for the Abu Dhabi HSBC Championship.