American Jordan Spieth has made it three victories in his past eight events after capturing the PGA Tour’s Valspar Championship in a play-off at Tampa Bay.

Spieth (69) holed a 20-foot birdie putt at the third extra play-off hole to defeat fellow Americans Patrick Reed (66) and Sean O’Hair (67) after all three ended regulation place at 10-under par on the Copperhead course. 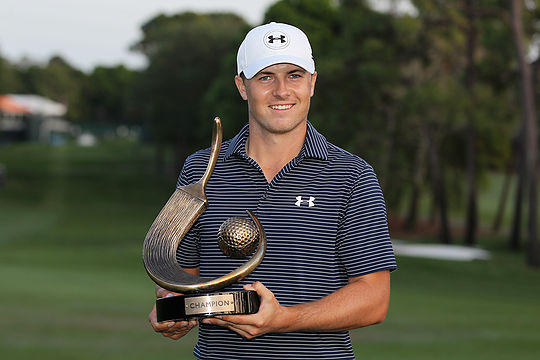 It was the fourth occasion in the past five PGA Tour events (Northern Trust Open, Honda Classic and Puerto Rico Open) there has been a play-off on the 2014/15 wraparound schedule.

The three players returned to the uphill par four 18th hole with Spieth playing the best second shot only to walk off with a par while Reed got up-and-down from a greenside bunker while O’Hair was on the opposite side of the cart path down the right side but played a good second to find the green and two putt for par.

Officials then moved the three to the 16th – the first hole of the closing three holes known as the ‘Snake Pit’ – with all players walking off with pars.

However the 21-year old Spieth shut out his rivals after holing a remarkable putt to win the $US 5.9m event at the Innisbrook Resort.

“It was a crazy back nine because I was three behind with six holes to play,” said Spieth.

“But then that was the best Michael my caddy and I had done, and just the scrambling coming in to make those par saves, and then to make that putt there at 17, and the third extra hole, was just luck as it that didn’t hit the hole I am staring at a four foot slider.”

The victory is Spieth’s second regular PGA Tour success after he broke through to capture the 2013 John Deere Classic.

Spieth’s victory takes the Texan through the $US10m barrier in PGA prize money is just 65 tournaments and he became only the second player in the past 75 years to have won two PGA Tour events by age 22.

New Zealand’s Danny Lee captured the top spot of the Australasian field to finish in T7 with Greg Chalmers the only other Australasian to make the cut in a tie for 47th.