Jordan Spieth overcame a determined Patrick Cantlay on the first playoff hole to win the RBC Heritage on Sunday.

The pair finished in regulation play at 13-under-par with Spieth making a birdie on the last for a 5-under-par 66 with Cantlay firing a closing 68.

Spieth claimed his first PGA Tour victory of the season with a par on the sudden-death playoff 18th hole at Harbour Town Golf Links while Cantlay carded a bogey. Both players had hit into the greenside bunker whereby Spieth executed a superb bunker shot to less than 30 centimetres for a tap-in par, with Cantlay in trouble with a plugged lie to explode to 10 metres before missing the conversion putt.

“I was actually very surprised by the amount of support that everyone had this week, and I felt a lot of it personally,” said Spieth.

“These crowds were just fantastic for it being a non-major. What a great tournament to win. It’s an amazing golf course.”

It was his 13th victory on the PGA Tour and first since the 2021 Valero Texas Open for the 28-year-old Spieth and the win pushed his career earnings past the US$50 million mark. 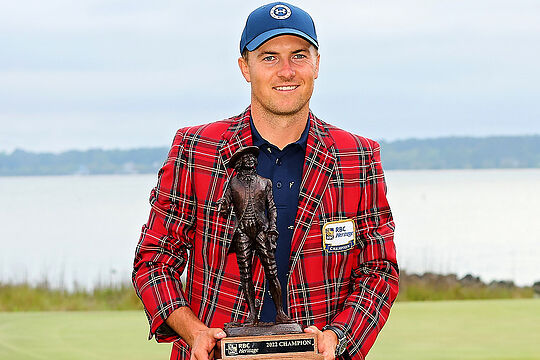 Aussie Cam Davis finished in a share of 3rd position, an impressive final round 63 moving him a massive 35 places up the leaderboard for his best finish so far this season.

Davis had a previous top-10 finish at the Sentry Tournament of Champions back in January and now moves to 99th on the FedExCup Standings. The Sydneysider previously won on the PGA Tour with victory at the 2021 Rocket Mortgage Classic.

The only other Australian in the field was Cam Smith who uncharacteristically missed the weekend after opening with rounds of 73-70 to miss the cut by a stroke.

Spieth is a three-time major winner, having won the 2015 Masters and US Open and the 2017 British Open and can complete a career Grand Slam by winning next month’s PGA Championship at Southern Hills. Prior to Sunday’s victory Spieth had finished outside the top-25 in each of his previous six starts on the PGA Tour.

Back in 2017, Spieth was on top of the golfing world. He had captured The Open Championship in sterling fashion but golf can be an infamously fickle game. He fell to as low as 92nd in the world rankings, had an injured hand and his well-respected ball striking, both driving and long game, had faltered.

Yet Spieth’s talent is undeniable and he put on another fantastic performance on Sunday, holding his nerve to hopefully set up himself up for that major slam. There are only 14 Americans who have won more majors than Spieth and they are all household names including Jack Nicklaus (18), Tiger Woods (15), Ben Hogan (9), Arnold Palmer (7), and Lee Trevino (6).

You can be sure next month at the PGA Championship he’ll be eager to claim that final piece of the grand slam puzzle having regained that winning feeling on Sunday.