It was quite possibly the shot that won him the Open Championship.

Now American star Jordan Spieth has agreed to share ‘that club’ with the world by donating the three-iron he used for that memorable shot back to Royal Birkdale, where he so courageously went on to win the world’s oldest major championship, the British Open in July. 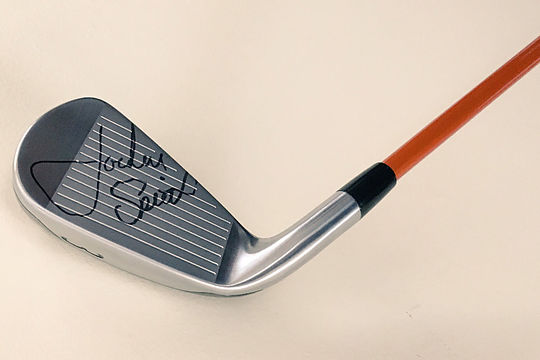 Every one of his captive audience, worldwide, held their collective breath while Spieth contemplated the shot after one of the most errant drives of his life ended up in an unplayable lie on the other side of a hill beside the course as he played the 13th hole with a narrow lead over fellow American Matt Kuchar.

Spieth finished up taking a one-shot penalty from an unplayable lie and he and his caddy then contemplated the shot for several minutes before taking a drop on the driving range, which surprisingly was in bounds.

He eventually took that three-iron and smashed it back over the hill and back onto the course before going on to save what could only be termed a magnificent bogey.

Now the three-time major champion has autographed the three-iron and sent it back to the club to be preserved for posterity.

Spieth’s message with the club was simple:

“Special delivery to the club today. No ordinary 3-iron (No visible ill-effects of playing from the range!) Many Thanks”

The Royal Birkdale club at Southport, near Liverpool has revealed the famous club will now join a group of other mementos in the clubhouse of the course where Peter Thomson, Arnold Palmer, Tom Watson, Ian Baker-Finch and Mark O’Meara also famously won The Open as well.