Spieth holds on to lead, McIlroy one back at Masters

Jordan Spieth retains a one stroke lead over Rory McIIroy as the battle of the two former world number one’s intensifies at Augusta.

McIlroy, who is aiming to complete a clean sweep of golf’s four majors, sunk three birdies in the final six holes to finish 3-under at the midway point. The Northern Irishman shot a one-under 71, before defending champion Spieth carded a 2-over 74. 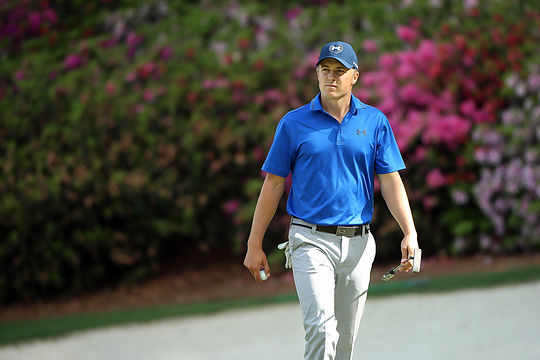 Jordan Spieth holds on to a one shot lead on day two of the Masters (Credit: Getty Images)

“It was a couple of strokes higher than what I was looking for,” said Spieth.

“I thought level par was a good score today. But it’s pretty much a new tournament coming our way for the last couple of rounds now.”

“The conditions were very difficult, and if there’s no water thrown on these greens, it’s going to be a bit ridiculous with the winds.”

“Today was a learning experience and it was tough to hold it together.”

“It was a grind on each hole, and emotionally it was difficult. Rory is right on my heels, so it’s no easy task ahead.”

McIlroy, who began the day four shots adrift of Spieth and fell a massive eight back with seven to play, stormed into contention with a blistering back nine charge on what is considered ‘moving day’ at the Masters.

After a slow start, McIlroy made his move after the turn, nailing three birdies over his final six holes for a one-under 71, equal to the lowest round of the day.

New Zealand’s Danny Lee (74) and American Scott Piercy (72) sit two off the lead with Japan’s Hideki Matsuyama (72), Denmark’s Soren Kjeldsen (74) and American Brandt Snedeker (72) one further back after a wild and woolly day that saw just seven men under par as the year’s first major hit the midway mark.

Jason Day remains the best of the Australians in a tie for 15th following rounds of 72-73 to be at 1-over, five strokes behind Spieth.

The cut came in a 6-over with Marc Leishman missing by a stroke finishing at 7-over, with Steven Bowditch firing rounds of 79-82.