Spieth in the box-seat for historic major run

History beckons on the Old Course for Jordan Spieth.

Three players – Aussie Jason Day, South African Louis Oosthuizen and Irish amateur Paul Dunne – are tied for the lead, and with Spieth just one back. 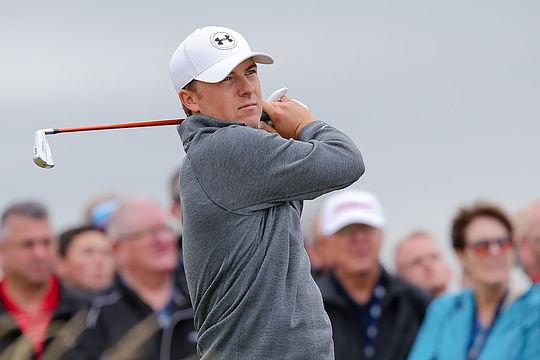 Jordan Spieth could become the first person in over 60 years to claim the first three majors of the season with victory at St Andrews tomorrow (Credit: www.golffile.ie)

It’s a tightly packed leaderboard with 14 players are at 9 under or better and overall 25 players within five shots of the lead.

“I highly doubt somebody really breaks through the pack tomorrow, given this golf course can yield a lot of birdies,” Spieth said. “It will be a pretty bunched leaderboard.”

Sunday’s third round was the easiest of the week, with St. Andrews playing to a sub-70 scoring average as players faced little wind and soft conditions.

Rain and wind are scheduled to return to the forecast Monday. Showers are scheduled to hit in the mid-afternoon, as are gusts up to 25 mph. The final group of Dunne and Oosthuizen is scheduled to tee off at 2:30 p.m. local time and with the second-to-last group of Spieth and Day tees off at 2:20.

Players can make birdies on the Old Course’s outward nine, but things get tough as the course heads for home.

Five of the Old Course’s six hardest holes are on the inward nine, including the Road Hole, which plays more than half a stroke over par. The short, par-4 18th allows for a closing birdie, though, and is the course’s second-easiest hole.

Even when weather is an obstacle, players can shoot low scores at the Old Course.

“This is not a golf course that the leaders tend to come back on,” Padraig Harrington said.

The low score in each round has been no higher than 66. Marc Leishman shot 64 on Sunday, while Harrington fired 65. Another five players shot 66 in the third round as the course was soft and there was little wind.

Spieth said he will not look at the leaderboard much in the final round, though. His focus will be on his yardage book, with hopes that proper execution will put his name in the record book.

He’s trying to become the only player besides Ben Hogan in 1953 to win the year’s first three majors.

“It hasn’t come up in my head while I’ve been playing yet,” Spieth said about the Grand Slam chase.

“I can’t speak for tomorrow, given it’s the last round. If I have a chance coming down the stretch, if it creeps in, I’ll embrace it. I’ll embrace the opportunity that presents itself.”

Spieth insists that his pursuit of the Grand Slam hasn’t increased the pressure this week. Already owning two majors allows him to relax, he said, and will help him sleep a little easier tonight.

“If we have a chance to win and we don’t execute tomorrow, then we’re going to be OK,” Spieth said. “And with that attitude, it actually frees me up a little bit to say, ‘I can take these extra chances.’ ”

Spieth isn’t the only one who has a chance to make history. Dunne is looking to become the first amateur to win The Open since Bobby Jones. Oosthuizen could become just the third player after 1910 to win The Open twice at St. Andrews. The other two? Jack Nicklaus and Tiger Woods. Harrington is seeking a third Claret Jug.