World No. 1 Jordan Spieth was not impressed in being singled out as a tortoise for slow-play on the opening day of the Abu Dhabi HSBC Championship.

Spieth, competing for the first time in the UAE, was singled out by Chief Referee John Paramour as the Texan made his way to the final tee on route to an eventual four-under 68. 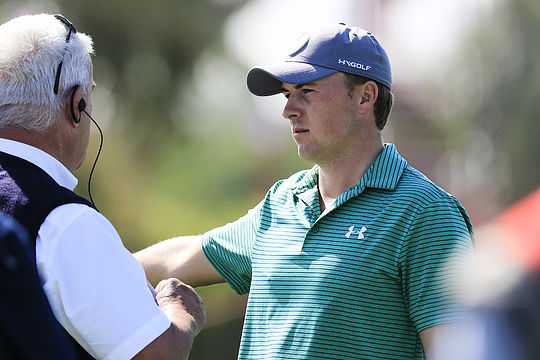 Paramour issued last year’s double Major Champion a very first ‘Monitoring’ bad time, less than a day after the new ‘Monitoring’ laws were brought into effect by the Tour.

“It was a bit odd as I got a ‘monitoring bad time’ on my putt on the eight when they took us off the clock on that green and the guys behind us hadn’t even reached the fairway, on a par five,” said Spieth.

“So it didn’t make any sense to me. If I can, I’ll try and wash it away after the round as I don’t know what the policy is on that.

“Because it doesn’t affect this round but if I get another one I get fined and I don’t think it’s necessarily a reason to get that bad time.”

“I understand if you are being timed and you are taking longer than the allotted time, you get a bad time. I understand the rule. But it doesn’t make a whole lot of sense when our group had caught up, you were going to take us off, and it had no effect on the round.”

“So it’s a bit of a grey area. I didn’t fight it, and I was respectful about it.”

Rory McIlroy, who played alongside Spieth for the first two days, laughed off the incident.

“It’s just probably a bit of over-enthusiasm in the first round of the first event of the year (smiling),” he said.

“So it was a bit of a weird one with the referee coming up to Jordan to say he had a bad time on a putt there when the guys behind hadn’t even reached their drives, so sometimes I feel the refs have to use a bit of common sense,” said McIlroy.

“I’ve played a lot alongside Jordan and he’s far from a slow player”.

Reigning US Amateur champion Bryson Dechambeau, and competing on an invitation, is a shock leader snatching an eagle and six birdies to lead by one with an eight under par 64.

Wade Ormsby leads the Aussie attack in T12 following an opening round of 3-under 69.