American Jordan Spieth, runner-up at this year’s US Masters, is the outright leader at the Australian Open after firing a four-under 67 with world number one and defending champion, Rory McIlroy, positioned well two strokes behind.

The 21-year-old Spieth was one stroke clear of Aron Price, Andrew Tampion and Scott Gardiner, who landed himself a new $70,000 Lexus with a spectacular hole in one on the 176-metre par-3, 11th hole. 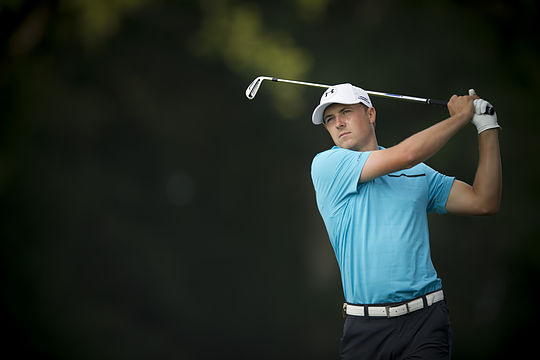 Click here to view 2014 Australian Open – Round One Gallery →

“It’s exciting to be back home playing in Australia and to win a great car like a Lexus is unbelievable,” said Gardiner.

“I had an opportunity to buy one about 10 years ago, so it’s great to get my hands on those keys because it’s a great automobile.”

McIlroy carded a two-under 69 to be well in mix in a share of fifth spot, but Adam Scott made a poor start in his quest for a second national championship with a double bogey on his opening hole.

Yet today was Spieth’s day as he charmed the fans and put on a wonderful display of precision golf which has seen the PGA Tour winner rise as one of the most promising prospects in golf.

“When we came out this morning it was misty and the wind was blowing hard,” said Spieth, who won the 2013 John Deer Classic and lost in a play-off to Patrick Reed at the Wyndham Championship.

“I knew that it was going to play difficult but once the conditions started to clear for us; there was certainly a score out there but it was hard to get it close.”

The majority of the field struggled on the newly designed Australian layout, no more so than one of the main draw cards and former Australian Open champion, Adam Scott.

Scott signed for a three-over 74 in a round that he would rather forget.

“It’s a bad start,” Scott said. “I made the worst of my worst shots and didn’t convert any of the good ones early and then played good on the back [nine]. I’m on the back foot again this week.”

The former world number one hasn’t missed a cut on the US PGA Tour since the Byron Nelson Championship in May 2012.

Opening with a double-bogey six on the first hole, Scott went out in 40 on the front nine before clawing back two shots coming home to be seven behind Spieth.

Scott will have to card a solid red number tomorrow as he currently sits 86th to earn a spot on the weekend.