Jordan Spieth shot a 5-under-par 65 in the third round of the British Open at Royal Birkdale to sit at 11-under and will take a handy three shot lead into Sunday’s final round.

Spieth, who turns 24 next week, could join Jack Nicklaus as the only players to win three legs of a Grand Slam at age 23. Spieth won the Masters and US Open in 2015 and looks in control in the third major of the year. 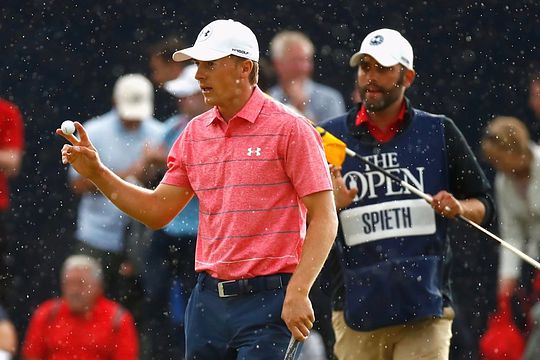 The American enjoys a sizeable buffer from fellow countryman Matt Kuchar who is at 8-under and three shots ahead of third-placed Austin Connelly and Brooks Koepka.

Consistency is key at a Major and Spieth is the only player to finish every round under par this week and in the process could become the youngest Open winner since a 22-year-old Seve Ballesteros claimed the title in 1979.

“Everything I’ve gone through, both good and bad, is advantageous for me,” said Spieth.

“If I win tomorrow, I’ll still be learning and it all goes into my process. Tomorrow will be emotionally draining but I need to stay neutral in my head.”

Nothing is guaranteed, of course, and memories of the Masters last year when Spieth let slip a five shot lead with nine holes to play will still be fresh in his mind.

“What happened at the Masters last year was a humbling experience but I’ve learned from it,” said Spieth.

A Sunday victory for Spieth would mean the Texan would head to the USPGA Championship next month with the chance to complete the career Grand Slam ahead of the likes of Gene Sarazen, Ben Hogan, Jack Nicklaus, Gary Player and Tiger Woods.

Whilst Spieth looked in control today, it was South African Brendan Grace who put on a stellar display of golf, shooting a 62 for the lowest round ever in any major championship. Yet Grace’s efforts in some respect were over shadowed by Spieth’s solid links play for the third day in a row.

History therefore awaits for Spieth and it promises to be a stellar final round at this year’s Open Championship.

Jason Day registered a bogey-free round with the former world No. 1 finishing with a 5-under 65 to put him at even par to be the best of the Aussies along with Scott Hend, who fired a third round 65 to finish alongside Day in a share of 18th position at even par.

Marc Leishman is in a share of 29th position firing a 66 to be at 1-over. Adam Scott and Andrew Dodt are at 3-over and in a share of 43rd position with Scott’s even par round not giving the former Masters Champion any advancement up the leaderboard.

Aaron Baddeley rounds out the Aussie contingent after a 2-over 72 to be in a share of 75th position.