Jordan Spieth made history on Sunday by becoming only the sixth player to capture the Masters and US Open in one season.

The second major of the year did not disappoint the fans with a final day Sunday filled with dramatic turns and twists and a history-making victory.

Winning the US Open and Masters in the same year puts Jordan Spieth in a class with Tiger Woods, Jack Nicklaus, Arnold Palmer, and Ben Hogan.

Dustin Johnson had a 72nd-hole putt to win and a two putt to force a Monday 18 hole play off but proceeded to take three from 12ft, handing Spieth the title.

Johnson’s putting all Sunday was enough to make most fans cringe as putts slipped by the hole, along with Johnson’s chances of collecting his first major.

Johnson should have a major win by now but he’s blown it away now on too many occasions including his Sunday implosion at the US Open at Pebble Beach, the missed tee shot out-of-bounds at Royal St George’s at the Open and the rules mishap at the PGA Championship at Whistling Straits.

In contrast, Spieth is halfway towards a career grand slam. 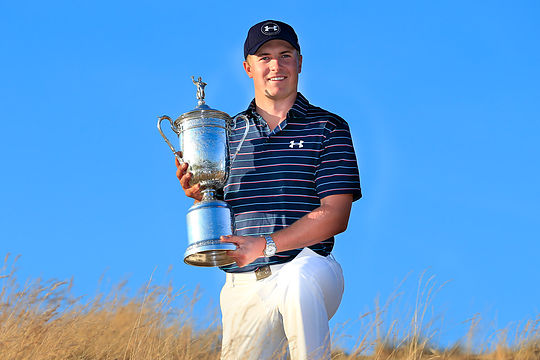 “You can’t win them all if you don’t win the first two,” he said during his victory address. “So we are going to go St Andrews looking for the Claret Jug. I believe we can get it done.”

That’s the mental resolve within Spieth, he believes despite his relative young years that he can win and the 21-year-old Texan will head to the Open seeking a third major victory in succession, the first time such a feat has been possible on the old course since 1960. Then, Arnold Palmer finished second, aged 30.

“I’ve now been doing it for a while,” Spieth says. “I don’t really think of my age.”

“The focus this year was on the majors,” Spieth says. “The goals were the majors. They weren’t on winning a certain number of times or getting into contention in a major. It was: ‘Let’s find a winning formula in a major’.”

South African Branden Grace was tied with Spieth before blocking his tee shot on 16 out of bounds. Louis Oosthuizen played the Sunday back nine in just 29 shots for a 4- under total to finish in a share of second with Johnson.

Adam Scott, showed the benefits of having Steve Williams back on the bag. Scott signed off with an amazing final round 64 for a share of fourth with Grace and 21-year-old Aussie Cameron Smith.

Smith played a stellar tournament having come through sectional qualification to record a top-5 finish at his first major which sees the Queenslander and former Australian Amateur champion with starts at The Open Championship at St Andrews, the 2016 Masters and a return trip to the Open at Oakmont next year.

Jason Day needed to be treated for vertigo at various stages during the tournament, yet the world number 10 fought on to record a top-10 result following his final round of 4-over 74.

Day’s heroic efforts across the entire four days were applauded by the golfing community and public alike. He fought hard to retain his composure and gained many new fans around the globe.

John Senden finished in a tie for 14th at 2-over with Geoff Ogilvy the fifth Aussie inside the top 20 in 18th place following a final round 67.

Marcus Fraser was the only other Australian to make it through to the weekend in 64th place at 13-over.