Spieth putts his way to victory at Dean & Deluca

Jordan Spieth won the Dean & DeLuca Invitational by three shots on Sunday for his eighth PGA Tour victory, a total that even Tiger Woods did not achieve prior to his 23rd birthday.

Six birdies and just one bogey on the back nine got the job done for Spieth, who signed for a five-under 65 and won by three at 17-under from Harris English and four from Ryan Palmer and the 2012 US Open champion Webb Simpson.

With plenty of hecklers out there during the final round reminding Speith about the nature of what happened at the Masters, he proved again why he’s one of the best in the business.

Recently Spieth has been the spotlight for all the wrong reasons yet the negative questions about his capacity and resolve were quickly put to bed by the world number two and Spieth made sure to make it a point.

“I wasn’t sure how long it would take to get over the hurdle of having to come in to every single interview room, having to listen to crowds only talk about what happened a month ago,” he said. 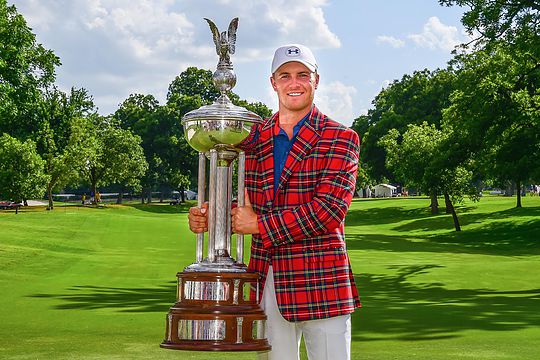 It was Spieth’s first win on any tour since January and his third consecutive tournament since his month-long break and the timing could not have been better.

“In our third tournament back, to come back and close this one out the way we did is really, really special. This day is a moment that’ll go down, no matter what happens in the next 30 years of my career, this will be one of the most important days that I’ve ever had.”

Spieth, who began the final round with a one-stroke lead, made the turn on Sunday trailing Harris English by two. Then began a putting exhibition that was nothing short of spectacular.

Marc Leishman was the best of the Australians finishing in a tie for 13th at 7-under with Steven Bowditch sharing in a tie for 22nd position at 4-under. Aaron Baddeley, Adam Scott were the other Aussies to make the weekend with Matt Jones, John Senden and Geoff Ogilvy missing the cut.

Spieth, like Jason Day and Rory McIlroy, will tee it up at the Memorial in Ohio on Thursday coming off a victory which means all the world’s top three are in form with Day winning the Players Championship at Sawgrass a fortnight ago and McIlroy taking out the Irish Open the following week.

With the US Open now just two weeks away the big guns are out.