Jordan Spieth holed a bunker shot on the first playoff hole to defeat US compatriot Daniel Berger and win the Travelers Championship for his 10th career US PGA Tour title.

The two-time major champion holed out from 20 metres for birdie from a greenside bunker with the 23-year-old Texan joining Tiger Woods as the only PGA Tour players in the modern era with 10 victories before the age of 24. Woods won 15 times before he turned 24.

Spieth held a one-stroke edge after each of the first three rounds. He closed with an even-par 70 to match Berger, who came home strong birdieing three of the final six holes for a 67 to finish at 12-under with Spieth.

Berger, who won the FedEx St. Jude Classic two weeks ago before missing the cut last week at the US Open, just missed a 15 metre putt from off the 18th green left that would have forced a second playoff hole.

Spieth was ecstatic with the result with his latest tour win showing similarities to his first, at the 2013 John Deere Classic, where he got into a playoff by holing out from a bunker on the 72nd hole. 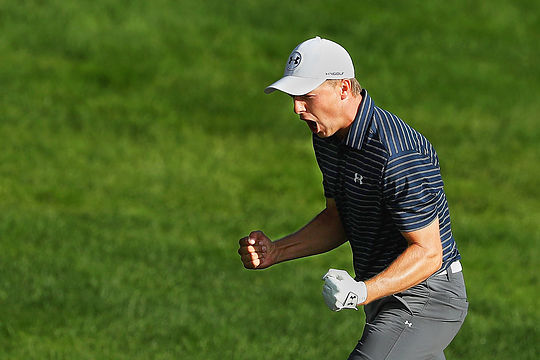 “At least this one had good speed going in,” said Spieth. “Obviously, this was one for the ages. I don’t know if I will ever have a moment like that again.”

Spieth birdied his first two holes during Sunday’s final round, only to lose momentum on the back nine. He missed a short par putt on 14 and was wayward with his drive on the 15th. His drive bounced off a tree and into the fairway on the playoff hole to keep his chances alive.

“This is probably my luckiest win, for sure, with all the breaks I got today,” said Spieth, who joined Justin Thomas (3), Dustin Johnson (3) and Hideki Matsuyama (2) as multiple winners this season.

Jordan Spieth: What’s In The Bag

Spieth has now won two times in each of the past two seasons, and he now sits fourth on the FedExCup standings and third in the Official World Golf Rankings.

Though Spieth has had two top-five finishes in tournaments since the end of April, he’s been somewhat disappointing in majors, tying for 11th as the Masters and missing the cut recently at the US Open. Sunday’s victory certainly has come at the right time for the Texan.

New Zealander Danny Lee secured an impressive tied third along with Charlie Hoffman with the pair finishing at 10-under.

Marc Leishman was the best of the Australians finishing in a tie for 17th position at 6-under, with Greg Chalmers in a tie for 66th at 1-over.

Geoff Ogilvy and Rod Pampling share a tie for 69th position at 2-over, whilst Jason Day missed the cut finishing at 2-over. Brett Coletta, Ryan Ruffels, Brett Drewitt and Stuart Appleby all missed the weekend.