Jordan Spieth has become the new Hero World Challenge title holder after storming his way to a 10-shot win with an impressive 26-under par tally on the ultra-exclusive Isleworth Country Club course.

The 21-year-old Dallas-born Spieth led from start to finish in carding a final round 66 in the Tiger Woods hosted event. 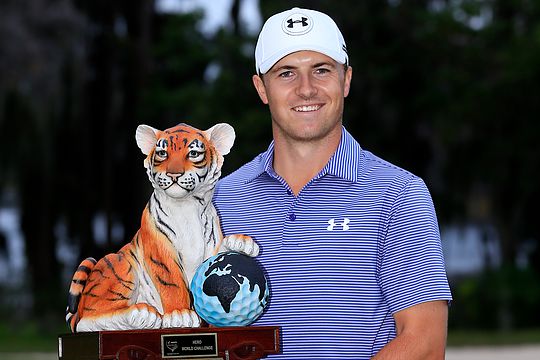 Jordan Spieth holds the 2014 Hero Challenge trophy after winning by 10 shots over the world-class field in Florida (Credit: www.golffile.ie)

Spieth’s winning margin was the largest on any Tour this season eclipsing Martin Kaymer’s European Tour counting eight-shot success in capturing the US Open and three shots further under par than Lee Westwood’s seven stroke success at the Asian Tour’s Maybank Malaysian Open.

Other Spieth victory facts include:

“I didn’t really know what the game plan was really going to be when I woke up this morning. I’ve never been in this position to be really far out front starting the day,” said Spieth.

“You know, you just got to be as positive as ‑‑ you got to really just think of it as I’m playing my best golf and it’s beating the best players in the world right now. You got to take that confidence into the round.”

“I made a birdie on 1, which was really big. Just get a putt going in. Hit three great shots there to start the round. I told Mike, Let’s get three more and we can’t be caught. That was the thing for the day.”

“And then by No. 7 that eagle went in and I had gotten to 5‑under, and from there I knew that if I just continued to do what I was doing that we would get the job done. Then kept setting more goals, more goals.”

“After I made it the turn I wanted to get to 30. I thought that would be a cool number that I’ve never even sniffed. That wasn’t going to be the case on 13 and 14 there.”

“So it was great. It was great to come back and get two birdies on the last four holes, to see a couple putts go in and close out this tournament. It was a really fun walk on that back nine.”

“Whether my emotions showed it or not I’m not sure, but inside we were really very, very pleased with the year and how it came to a close. This caps off the best golfing year that I’ve ever had.”

“Each year has been a little bit better than the last. Hope to continue to do so in 2015.”