As far as warm-up events go, it couldn’t get any better for Jordan Spieth.

Already the winner of three tournaments this plus two majors – Masters and US Open – Spieth defeated fellow-American Tom Gillis on the second play-off hole to win the John Deere Classic on Sunday after the pair finished at 20-under.

Spare a thought for Lee when on Sunday he picked up his ball on the fourth fairway. Lee forgot that lift, clean and place was no longer in effect, and his one-shot penalty ended up costing him a playoff spot with Spieth and Tom Gillis.

Many of the biggest names in the game had elected to tee it up at the Scottish Open in Gullane in preparation for the year’s third major but Spieth preferred instead to get match-ready staying in the US.

Despite many criticising his election to remain on home soil and compete at the venue where he won his first PGA Tour title in 2013, Spieth silenced the critics with a standout closing finish with rounds of 71-64-61-68.

“What an incredible week,” remarked Spieth following his victory. “Started off so slow, and to be able to shoot 20-under in three rounds is obviously nice momentum. I came here for a reason, and we accomplished that reason, and certainly have some momentum going into next week.” 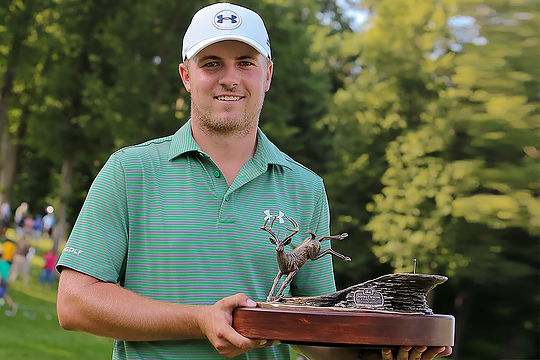 The victory was the world number two’s fourth of the season and sees Spieth targeting the third leg of a unique calendar grand slam when he sets off in Thursday’s opening round of The Open at St Andrews.

Before then Spieth feels his needs to do some work on his game, particularly with his ‘half-shots’ to feature at St Andrews.

“I hit some horrid iron shots this week when I had to take some off of it,” said Spieth.

“And that’s the definition of what you do over there when the wind picks up and the conditions are bad you’ve gotta hit three-quarter pinch shots and be able to control those and have great distance control.”

“And I don’t have that yet, so I need to get over there and work with my instructor to find the solution.”

Yet despite his game needing fine tuning, Spieth is ready for the challenge of links golf.

“Not everybody is going to play well the entire time, but it’s good to know that when I am feeling that spark, that we’re able to get it that deep, to 20-under.”