While it was not the result some Australians would have wanted, no-one can deny Jordan Spieth deserved to cap off his record-setting year by winning the Tour Championship and the $10 million FedExCup title.

The 22-year-old Texan fired a final round 1-under 69 to finish on 9-under and four strokes ahead of a trio including Henrik Stenson, Justin Rose and Kiwi Danny Lee.

His victory on Sunday took his 2015 PGA Tour season tally to five wins, including two majors, and should end any lingering discussions about the Player of the Year title being awarded next week.

While Jason Day has enjoyed an incredible season, it is Spieth who has ruled the headlines for most of the season with 15 top-10 finishes including 4 second places and over US$12 million in prizemoney not including the $10 million he won for the FedExCup title.

“It’s fantastic,” Spieth said. “I have an opportunity now, with a year like this and a bonus like that, to celebrate and to share it with the people that have made it possible. And that’s kind of the plan.”

“Our team did an unbelievable job this year. Everything was exactly how we needed it to be to peak at the right times. If we can continue to do that, then we’ll have more seasons like this.

“But right now, we’re going to enjoy it, and I’m able to help out those who made this possible. Because it was not a single effort.”

Spieth began the final round with a one shot lead over 2013 FedExCup Henrik Stenson but after just six holes, Spieth had slipped back alongside Stenson following back-to-back bogeys at the 5th and 6th holes.

Speith made his intentions clear from the 8th hole with three birdies coming in the next four holes before settling in with pars all the way home while the wheels fell off for Stenson across the back nine with bogeys at the 10th and 12th plus a double-bogey 6 at the 17th. 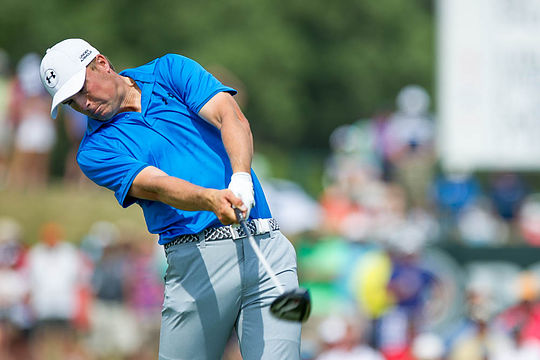 “It’s been a phenomenal year for him,” Stenson said. “I watched it first hand at the two first rounds at Augusta, and he played phenomenal and putted phenomenal. And it was the same putting display, really, today. Just an exhibition on the greens, to be honest.”

“Yesterday, he holed some great ones coming in as well. So his putting and mental focus is the best in the world.”

While it was not the fairytale finish that Jason Day would have wanted, the 27-year-old was positive about what he had achieved this season including a major championship, 11 top-10 finishes and US$9.4 million in prizemoney.

“Now that it’s over, I’m looking forward to getting some rest. Really trying to take care of my body in the off season to come back as a new person for next year. And a lot more motivated, a lot more hungry to stay on top of the world.

“And I think it’s going to be a good off season for me because I’m going to work very, very hard and I’m looking forward to next season.”

The only other Aussie in field was Steven Bowditch, who finished two strokes behind Day at Even par after a final round 70. Bowditch closes out the season with over US$3 million in prizemoney and a win at the AT&T Byron Nelson back in May.