World number one Jason Day has carded a 1-under-par third round to sit at even par overall and just three behind third round leader Jordan Spieth who fired a 1-over-par round to be at 3-under.

Birdies on the 12th, 14th and 15th saw Spieth at one point reach 6-under overall, but a bogey on the 17th and a double on the final hole saw his lead dwindle to just one shot ahead of Masters rookie Smylie Kaufman. 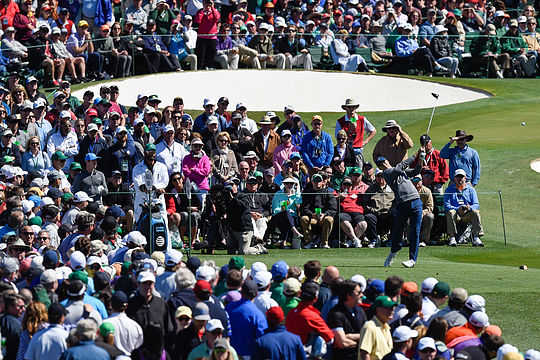 Jordan Spieth tees off on day three of the Masters (Credit: Matt Harris)

Spieth’s poor final hole – driving right into the trees before falling 50 foot short of the pin with an undercooked third shot – gave renewed hope to the rest of the leaderboard.

“Two under with three to go and the wind at your side, I just got really wayward from there,” said Spieth.

“I just have to absolutely throw away the finish to this round, pretend it’s a new round, everyone is tied and you have to shoot the best score to win.”

“I have to understand it’s the position I wanted to be in after 54 holes and not think about the finish to this round.”

Former two-time Masters champion, now senior tour player, Bernhard Langer, is in a tie for 3rd place at 1-under along with Hideki Matsuyama.

58-year-old Langer, who won the Green Jacket in 1985 and 1993 and is a former world No.1, was five shots adrift of overnight leader Spieth at the start of Saturday’s third round.

Dustin Johnson and Englishman Danny Willett are a shot further back at even par, alongside Day.

Rory McIlroy started the day one shot behind Spieth, but ended five back after a 77.

McIlroy was unable to put any pressure on Spieth, not making a single birdie all day as he played alongside Spieth for the first time at a major on the weekend. The Northern Irishman is five shots behind Spieth heading into Sunday, so has a chance of a remarkable comeback victory.

Only six players managed to card under-par third rounds, with Kaufman carding the best round of the day with a three-under 69.

Adam Scott carded a third round 75 to blow his chances of a second green jacket, with Scott at 7-over-par and currently in a tie for 34th position.

Scott was not the only Aussie to struggle with Cameron Smith firing an 82 which saw him slide back twenty places in to a tie for 53rd.