St Michael’s and Pymble Golf Clubs will meet to decide the winner of the 2019 Eric Apperly Shield following wins over the ACT Monaro and Concord on Sunday in the Golf NSW Men’s Inter-Club series for 21-years and under.

ACT Monaro, who were finalists last year against Concord, certainly pushed the undefeated and number 1 seeds St Michael’s in a stellar match that was ultimately determined by the St Michael’s middle order of Aidan Powter (pictured) and Jamie Krzyszczak. 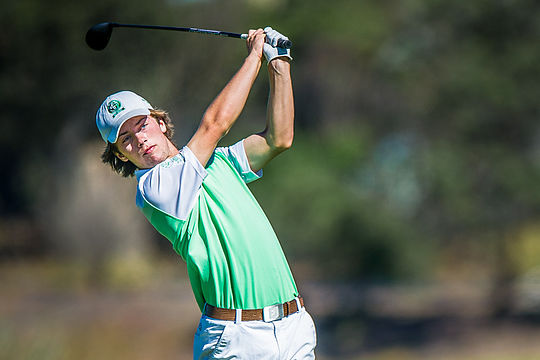 The match sat precariously in the balance after ACT Monaro got off to a quick start with wins to David Howard and Nicholas Pullen at number five and six. St Michael’s quickly secured two matches with Harrison Crowe and Wielang Wang winning easily to move the focus of the outcome to the middle order.

Robby Furner, winner of the 2017 Narooma Open and ACT Monaro’s captain, played solid golf in his match against Aidan Powter with a superb short game and putting, keeping Powter at bay for the majority of their match.

However, on the 16th Furner failed to get up and down leaving their match all square with two to play. Powter then found water with his tee shot on the par 5, 17th to open the door for an ACT Monaro win, yet pulled off an impressive 6 iron to the fringe of the green before saving par to half the hole.

With the pair still square and the other match of Krzysczak and Aaron Maxwell returning to square after Maxwell won the 16th, the sides were locked in a tremendous battle.

On the 153 metre par 3, 18th Powter nailed his 8 iron to two metres of the pin after Furner flew the green leaving a delicate up and down. A safe two putt from the Sydney-sider secured the vital third match for St Michael’s, ensuring at worst a playoff to make the final.

Krzyszczak had the better part of his opponent Aaron Maxwell for most of the match, moving at one stage to be 1-up with 2 to play.

It was then Maxwell applied the pressure and after a three putt from Kryszczak on the 18th the match returned to all-square with sudden death extra holes needed to determine their match and which team would make the final.

Krzyszczak finally overcoming a determined Maxwell on the 20th for a 4-2 win.

The other semi-final between defending champions Concord against an undefeated Pymble team was an equally nail-biting affair. This match also required six extra sudden death play-off holes to determine the victor, with Pymble’s James Conran defeating Concord’s Josh Gadd after the teams finished 3-3.

Pymble, winners of this competition in 2016, were spearheaded by Conran who won his top-order match 3&2, Lachlan Chamberlain who defeated Lachlan Jones 2&1, and Ned Waddington winning the 5th order match on the 19th.

Concord recorded victories with Blake Phillips, Bladd Gadd, who now heads to the US Collegiate system, and Harry Peterson.