The Eric Apperly Shield is an inter-club competition open to metropolitan & regional clubs in NSW for male golfers who are 21 years of age and under who play in a six man matchplay format without the benefit of handicap and is regarded as one of the pinnacle elite junior/cadet inter-club tournaments in NSW. 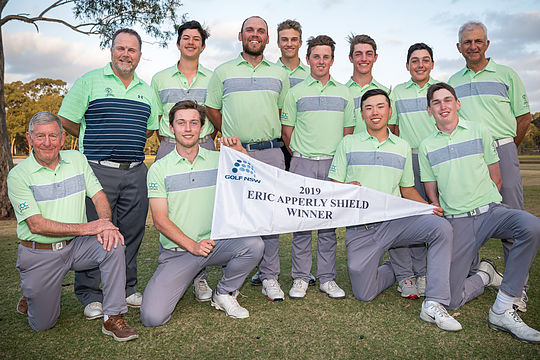 This year’s final will go down as one of the closest since the competition’s inception in 1952, which coincidentally was also won by St Michael’s.

At this stage most other matches were in Pymble’s favour, yet Aidan Powter playing number 2 for St Michael’s had blasted out of the blocks to be be 4-up through nine against Lachlan Chamberlain in a battle between two undefeated players in the series.

A succession birdies by Powter resulted in a 7&6 win for St Michael’s, with Powter playing the equivalent of 4-under through 12 holes to get St Michael’s on the board.

The other matches were engaged in a terrific struggle, with neither encounter being more than 1-up at any stage.

Luke Allen at number 4 for Pymble was holding off an ever determined Eddie Ward until Ward made an impressive up-and-down on the tricky par 3, 17th to grab a 1-up advantage heading down the last.

Ward’s win on the 17th would be a pivotal part of the final as he secured a narrow 1-up victory for St Michael’s and saw the teams at two matches a piece.

The number 3 match between Pymble’s Jack Abadee and Jamie Krzyszcak was neck and neck, with Adadee having the advantage for most of the match before Krzyszcak made a miraculous save on the 17th to keep the match 1-up, with Krzyszack two-putting the last and ensuring at worst a 3-3 draw for St Michael’s.

The top-order match between Reid Brown and Weiliang Wang was a classic with 21 holes needed to determine their outcome which fell Pymble’s way after Brown played magnificent golf shot by driving the 21st par 4 hole to set up the birdie and the win.

The pair then heading into sudden death play-off to determine the flag and after Wang hit a magnificent fade approach around trees to be on the green in regulation when Brown was forced to punch back onto the fairway, a two-putt from Wang secured the outcome in what was a terrific final.