With the victory, St Michael’s becomes the first club ever to hold the Sydney Metropolitan Major Division 1 Pennant, Junior Pennant and Eric Apperly Shield in the same season.

“This has been a true club effort to get where we are to not only win today, but to have three main flags to our credit,” said John Serhan, the St Michael’s team coach.

“Everyone has put in a tremendous amount of effort. We, as a club, have invested heavily in nurturing our own players and the results are there. The boys played with passion and were a formidable force this season. This is a win they fully deserved.”

The final had shaped up to be a contest between two of the strongest club teams in the country with Moore Park making its sixth straight Division 1 against St Michael’s, a club that has devoted considerable resources and investment with junior development programs having won the Junior Pennant in 2008 and 2009.

The signs of a St Michael’s victory came early after Travis Smyth, playing number seven, accounted for Steve Slappendell with a solid 3&2 win. 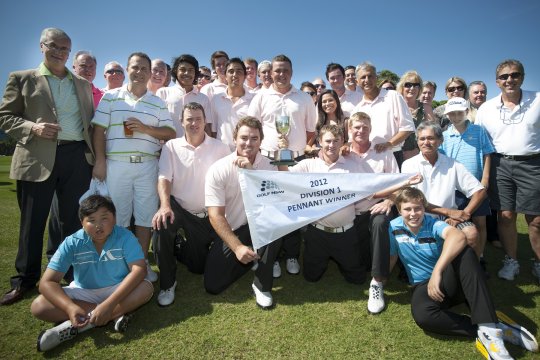 Shaun Cameron, another junior player to emerge into the Division 1 ranks, won the sixth order match with a 3&1 win over Moore Park’s Darren Shepherd to give St Michael’s the first two matches.

When St Michael’s number five and team captain, Luke Roberts, held off a determined Josh Collins with a 3&2 win, the momentum had swung to St Michael’s with three out of three lower order matches falling into St Michael’s hands.

“Full credit to St Michael’s as their got the jump on us early,” said Clancy Bowe, captain for Moore Park.

“Our preparation coming into the final was there. We came through one of the toughest sections with matches against Long Reef, The Australian and The Lakes. The lads played well all season, just that today St Michael’s got off to a great start and made it tough for us to get back.”

With the final outcome determined from the opening four matches the top order matches with Dimi Papadatos against Matt Stieger, Clancy Bowe against Ben Clementson and Matt Gleeson against Zac Mullins were declared all-squared.

“This is a tremendous result for the guys and the Club,” said John Serhan.

“It has been a great year for St Michael’s golf club. Everyone has supported all avenues for our teams throughout the year. The hard work has really paid off and today the boys deserve the win.”

St Michael’s, in making the final, had accounted for Concord in last week’s semi-final at Twin Creeks with an impressive 6&1 win, spearheaded by Matt Stieger, who fought from three down to win the top-order match against Jarrod Freeman, 1-up.

Moore Park had been too strong for New South Wales, winning 5&2 to set the club for its sixth consecutive Division 1 Pennant finals appearance.

Moore Park has claimed the prized flag following successive victories in 2008 & 2009, as well as when they accounted for New South Wales with a 4½ to 2½ victory at Pennant Hills Golf Club in last year’s final.

In the other Sydney Major Divisional finals, Cabramatta defeated Wakehurst 5&2 in Division 2, seeing them progress to Division 1 next year.