St. Michael’s Golf Club members Kelsey Bennett and Harrison Crowe have secured victory in the finals of the Victorian Amateur Championship at Peninsula-Kingswood.

Bennett, the top seed, was in control of her match from the start against the second seed, Metropolitan’s Jeneath Wong, winning 3&2, while Crowe successfully defended his 2020 crown defeating South Australian Jack Buchanan with a 2&1 result. 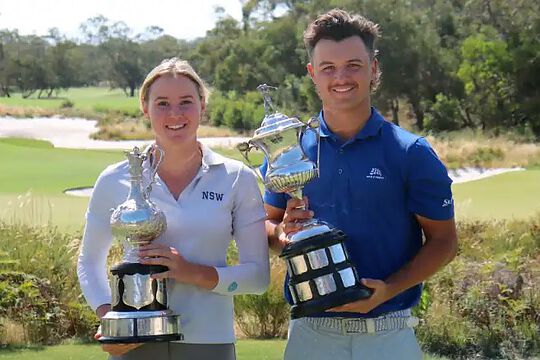 Crowe was able to take advantage in the final winning some early holes through birdies on the 3rd and 8th holes, however, Buchanan on the back nine responded well winning three holes in a row to grab the lead.

Crowe then dug deep to win two holes in a row through some impressive putting before sealing the victory with his tee shot onto the par 3 17th.

Last year Crowe defeated Joshua Greer 6&5 at Metropolitan and joins a prestigious group of back-to-back winners of the championship including Andre Lautee, Craig Spence, Bradley Hughes. Other past championship winners include Geoff Ogilvy in 1997, Cameron Davis in 2014 and Stuart Appleby in 1991.

Bennett, who recently played stellar golf to just fall short of claiming the Women’s Amateur Asia Pacific Championship in Abu Dhabi has been a multiple winner this season including titles at the Tasmanian Open and Northern Territory Women’s Amateur. Her impressive run of results sees Bennett reaching a career high in the world amateur rankings of 122nd.

The next main amateur tournament on the Australian calendar is the Australian Master of the Amateurs at The Victoria Golf Club starting 10th January.