It was St Michael’s sixth Division 1 flag in the last eleven years and twelfth overall, placing the club one behind the all-time winner of Major Pennant flags, NSW Golf Club. 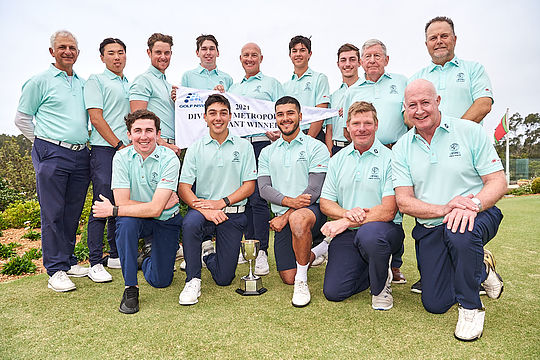 The number 7 match saw Orlando Janschek collecting a nice 3&1 win over The Australian’s captain, Luke Roberts, to get St Michael’s the opening match on the board.

Earlier former professional and Victorian Open winner Matt Giles playing number 4 for The Australian was too strong for Mike Hammond, winning 5&4 to see the final one match each.

The number 6 and 5 matches were heading into extra holes with Jeff Pullen getting another vital match win for St Michael’s on the 20th hole over Harrison Glenday. Daley Loumanis at number 5 then secured his match against Jonathan Boediman on the 19th to give St Michael’s a 3-1 match advantage.

Yet the final was not over after Tom Heaton accounted for Jordie Garner 4&3 in the top order match leaving two other matches in the balance.

Former US College player Daniel Kolar playing number 2 for St Michael’s then produced an impressive 4&3 win over the much touted Jeffrey Guan. Kolar gave Guan a lesson in matchplay with strategic tee and precision iron play around the majestic Royal Sydney layout, leaving Guan in his wake.

Much has been said about Guan as the next best thing in Australian golf, yet what was on display on Sunday failed to move the needle. Predicting such future greatness in golf and being told to remember his name, especially with a player still so young and with plenty of time for development, is fraught with danger. In my mind the jury is still out.

As the final unfolded much attention was placed on the third match against Weliang Wang and Josh Todd which had transformed into a classic one-on-one match up with both exchanging holes through the day in a nail-biting match.

Todd drove the ball wonderfully, placing considerable pressure on his opponent yet Wang’s short game kept him in the match. On the 16th Wang salvaged a par with a superb up-and-down to keep his 1-up advantage with two holes remaining.

Royal Sydney’s par 3 17th has produced plenty of drama over the years and again proved that par 3′s can still be great holes.

Playing into a strong southerly and with the pin on the lower front edge, both players missed the putting surface. Wang again hit another delightful chip to 4 metres before draining the winning putt after Todd was unable to salvage a par.

Full credit needs also to go to Golf NSW who has managed to hold all Major Pennant series despite the challenges of COVID-19.

Inter-club matches are the soul of amateur golf and this was reflected in the passion and spirit in which Sunday’s final was undertaken.