The 2021 Sydney Major Metropolitan Pennant competition got underway last Sunday with defending Division 1 Flag holders St Michael’s getting off to a flying start with a 7-0 win over Macquarie Links.

Played from February to April, the series is a contest between two clubs of seven (7) individual matches played over 18-holes of matchplay without the benefit of handicap. Clubs participating in the Major Pennant are divided into five divisions with four Sections in each division. 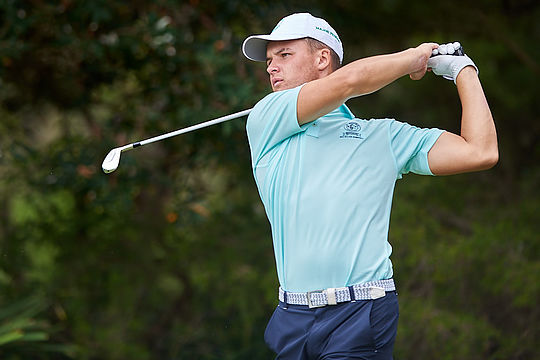 With the 2020 series only wrapping up last month, the St Michael’s outfit continued their momentum which has seen the eastern Sydney club record five Division 1 flags since 2010, the most of any other club during that time.

The 2021 team is essentially the same as the winning St Michael’s 2020 team, with the exception of one player who is currently attending college in the US.

John Serhan, the NSW Men’s coach oversees the St Michael’s outfit with a support team including Gerard Raper, who spearheaded the development of the winning 2010, 2012-13 teams.

Harrison Crowe (pictured) was playing the top-order spot and was well supported by Daniel Kolar, who has re-joined the team following competition of his degree at Washington State on a golfing scholarship.

Jordie Garner, Welliang Wang, Daley Loumanis, Mike Hammond and Jeff Pullen were the others in Sunday’s lineup. The 7-0 win was the largest margin of all teams in Division 1.

The Australian Golf Club, which is another club with an impressive history in pennants defeated 2020 Division 1 finalist Monash 5½-1½, with former professional and Victorian Open winner Matthew Giles playing number 3.

The 2021 draw will see six rounds being played with the semi-finals scheduled for 14th March and the final a week after being played at Terry Hills Country & Golf Club on 21st March.

The Women’s Major Pennant reining Division 1 flag holders The Australian tied with Bonnie Doon, NSW was too strong for Stonecutters Ridge winning 5-0, whilst 2019-19 flag winners Concord overcame St Michael’s in an away game with a 3½-1½ win.

Avondale accounted for The Lakes with an impressive 4½-½ win.