St Michael’s accounted for Concord with an impressive 6&1 win, spearheaded by Matt Stieger, who fought from three down to win the top-order match against Jarrod Freeman, 1-up. 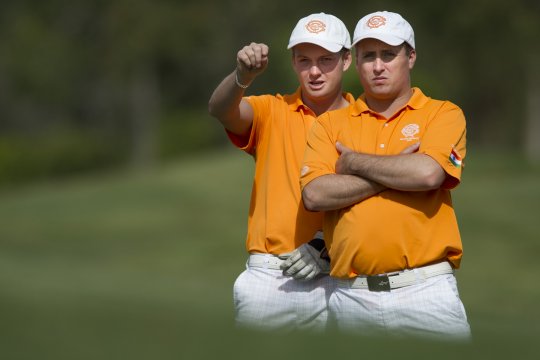 Matt Glesson discusses his options with his caddie during the semi final of the Sydney Division 1 Pennant series (Photo: Anthony Powter)

Moore Park was too strong for New South Wales, winning 5&2 to set the club for its sixth consecutive Division 1 Pennant finals appearance.

Moore Park has claimed the prized flag following successive victories in 2008 & 2009, as well as last year when they accounted for New South Wales with a 4½ to 2½ victory at Pennant Hills Golf Club.

Clancy Bowe, playing number two for Moore Park, won his match 1-up over Michael Bell, Matt Gleeson accounted for Dean Van Kampen 4&3, Matt Grandell’s 1-up victory over Jon Yim was impressive, as was Josh Collins’ win on the 19th over Brian Byrne.

Michael Lambert, runner-up to Brett Drewitt at this year’s NSW Amateur, won the top-order match for New South Wales with a stellar 2-up win over Dimi Papadatos.

Moore Park is in the process of re-building and this season has seen solid performances by newcomers Dimi Papadatos, Matt Gleeson, Matt Crandell, Darren Shepherd, Steve Slappendel to keep the club in the winner’s circle.

Steve Slappendell has been one of the standout performers for Moore Park.

After a slow start to the season, Slappendell came back from two down with four to play at The Lakes to secure a vital win for the Club in the sixth round.

In the fourth round match against The Australian, Slappendell also came from three down after four to win his match to set Moore Park up for the final series.

Darren Shepherd’s return to form has also pushed Moore Park to victory with pivotal wins in the lower order and Matt Gleeson’s performance after transferring from The Australian Golf Club has been impressive all series with four wins to his credit.

Clancy Bowe, the Irish International and Moore Park’s team Captain, continues to defeat class players in the top order and has played a major role in all matches for the club.

St Michael’s won the Division 1 flag in 2010 – defeating Moore Park in the final – the club’s first since 1986 and its seventh Major Pennant flag.

More recently St Michael’s has evolved into one of the powerhouses of the Pennant competition following a development program headed by John Serhan, Jeff Wagner and Gerard Raper, with the Club contributing enormous time and resources in a junior development.

The time and effort has rewarded the eastern Sydney club with two of the current team members, Travis Smythe and Shawn Cameron, members of the winning St Michael’s 2011 Junior Pennant team.

St Michael’s are also the current Eric Apperly Shield flag holders and a win next week in the Division 1 Final at Ryde-Parramatta Golf Cub will make St Michael’s the first club in over thirty years to hold current Major, Junior and Eric Apperly flags.

The 6&1 win over Concord in yesterday’s semi-final was indicative of the power the St Michael’s line up possess.

Matt Stieger is playing well as is Ben Clementson. Both recently recorded stellar wins with Stieger securing the Monash Masters and Clementson winning the NSW Cup.

The middle order of St Michael’s is supported well by Zack Mullins, who returned this season to St Michael’s after a brief stint playing for The Australian, and former NSW Amateur Medallist, Michael Williams.

The Moore Park against St Michael’s match up next Sunday at Ryde-Parramatta Golf Club is a repeat of the 2010 Division 1 final, which St Michaels won.

At 6040 metres, Ryde-Parramatta is a short but tough layout, peppered with fairway bunkers and a meandering creek that influences eleven of its holes. The layout is well suited for match play.

It sets the stage for an intriguing final against arguably two of the finest Pennant clubs in the nation.