In a closely fought contest St Michael’s Golf Club was able to edge out Long Reef Golf Club to retain its title of Metropolitan Major Pennants Champions for the second year running.

The final score line read 4½ to 2½ with the outcome of all matches being decided at or after the 15th hole. 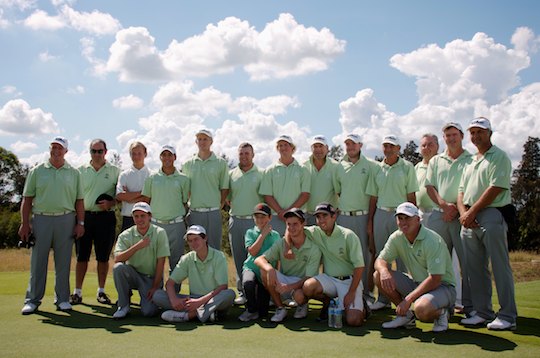 The final was played at the newly opened Stonecutters Ridge Golf Club at Colebee some 50 minutes north west of Sydney’s CBD. The location of the course means that it has been less affected by the drenching weather Sydney has endured during the past week.

The track was in great condition with just a light breeze to contend with, in contrast with the often stiff winds that these players have to face on their home courses.

Nevertheless this 6,300m layout designed by Greg Norman presented different challenges for the field. The course is sure to attract many curious Sydney golfers.

At the half way mark of the contest St Michael’s were up in three matches and Long Reef up in two. At the top of the order, Ben Clementson of St Michael’s was meeting the challenge of playing the leading amateur Brett Drewitt with the match all square, and at No. 2 Nathan Waters of Long Reef was square with Zac Mullins.

First home for St Michael’s playing at No. 7 was Daniel Kolar with a 3 and 2 win over Steve Prior. Kolar is the youngest member of the team and is undefeated this season. Long Reef quickly countered when Dillan Perry won 4 and 3 against Tim Hyland.

Of the remaining five matches after the 15th hole, three were square and St Micks were down in two.

In the end St Micks had a better performance down the final stretch.

Playing at No. 6 and No.5, Jake Baker and Travis Smyth both had 2 and 1 wins over Matt Saad and Hamish Campbell.

Zac Mullins clinched an unlikely victory to claim the championship for St Michael’s. Two down through 15, he recovered to win consecutive par threes at 16 and 17 to square the match.

On the 18th his opponent Nathan Waters miraculously made par after finding the rough twice. Mullins was pin high having crunched his 3 iron to reach the green in two. A birdie sealed his match.

With victory achieved Clementson sportingly conceded his match to Drewitt on the 18th tee with Drewitt up one and the St Michael’s captain Shaun Cameron halved his match with Will Barnet on the 19th.

Winning coach John Serhan said, “I anticipated the hard contest against Long Reef, who are a young and very well prepared team. Some fabulous golf was played today by everyone”.

Asked about is own team’s preparation, he said that critical factors were sessions focused on mental awareness, and the importance of following set routines throughout the match.

Maybe that was the difference down the final stretch.