The actual finishing score did not reflect the closeness of the final where three of the seven matches went down the 18th and a further two needed extra holes. 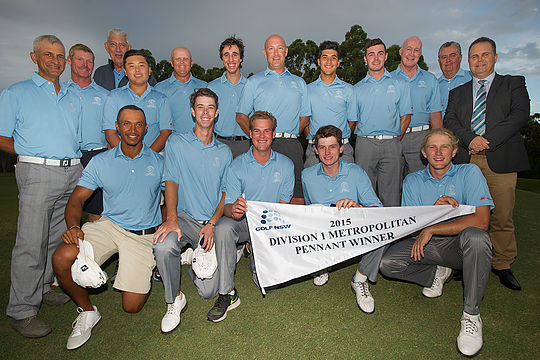 Making the turn with a commanding lead the St Michael’s outfit had to dig deep over the closing stages of the final as The Australian team mounted a spirited comeback.

Isaac Noh playing number five forced extra holes in his match with Josh Clark after Clark missed a simple putt on 18, before Noh winning on the 19th. Nick Crews playing number 7 for The Australian also finishing all square with Daniel Kolar.

When Shaun Cameron, playing number four against Toby Williams, flushed a magnificent mid-iron to 6 feet on the 18th hole on his way to sinking the birdie putt and winning the match, St Michael’s had some breathing space with two matches in to The Australian’s one win by Noh.

The 18th green again saw drama when Tim Hyland playing number three for St Michael’s drained a 15 footer birdie putt for a 1-up win over the talented Blake Windred.

There was nothing Windred could do as he watched Hyland’s putt steamroll its way into the hole and dashing The Australian’s chances of claiming the title, which they last won in 2007.

The Aussie had lost two vital matches with birdie putts on the last hole. When Jake Baker at number two for St Michael’s accounted for Kevin Yuan, 2&1, the final had been closed out. The top-order of Travis Smyth and Justin Warren declaring their match all-square.

“The Aussie put up a tremendous fight over us,” said John Serhan, St Michael’s coach.

“It was a credit to all the players how this final was played and it shows you that Major Pennant is alive and well in Sydney. This is the breeding ground for State representative players and this is our equivalent to the US Collegiate series.”

St Michael’s won the Division 1 flag back in 2010 defeating Moore Park, 5&2, for the club’s seventh Division 1 title. It was a victory 24 years in the making and had came off a development program headed by Serhan, Jeff Wagner and Team Manager, Gerard Raper.

Since, St Michael’s have developed itself into one of the strongest pennant teams in the competition winning again in 2012 and 2013, whilst being semi-finalist in 2011 and 2014.

“It’s a win which means a lot to our members, the Board and players involved,” said Serhan. “We have an experienced team which has played together for years. Having lost last year in the semi, we all wanted to get this one.”