St Michael’s has secured the 2020 Division 1 Sydney Metropolitan Major Pennant with a 5½ to 1½ win over Monash last Sunday at Riverside Oaks Golf Resort.

The victory was St Michael’s fifth Division 1 title in the last 11 years, confirming its position as one of the power houses of inter-club competition.

Monash, who recently returned to the top division after winning the Division 2 title last year, put up a gallant show yet the lower order of the St Michael’s outfit refused to give in and wins from Daley Loumanis, Jeff Pullen, Weiliang Wang, and team captain Mike Hammond in succession wrapped the final up. 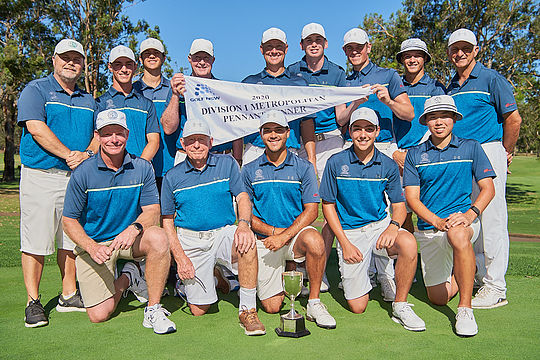 With the lower four results in, halves were called in the remaining matches involving Daniel Kolar against Jessie De Rooy, Jordie Garner against Jordan McKay and Harrison Crowe playing against Nathan Barbieri.

At the time St Michael’s was up in all three matches to win the top division and repeat its 2016 victory the last time the club won the Division 1 flag.

Going into the final St Michael’s had come off a tight encounter the week earlier in the semi-finals against neighbours and 2019 Division 1 title holders NSW. It was a match that went right down to the wire with Jordie Gardner needing to make a clutch 2 metre putt to stave off a playoff.

The semi-final victory obviously giving the team the added momentum and confidence moving into the final.

In the women’s Division 1 final The Australian accounted for Concord 4-1 with Charlotte Perkins and Brielle Mapanao securing early wins. Amy Chu then secured a vital 3&2 win over Belinda Ji to enable The Australian to collect the title. Avondale has made it two pennants in 2020 after claiming the Women’s Division 2 flag over Moore Park.

In the remaining Men’s Divisions Twin Creeks won over Penrith in the Division 2 final, Cabramatta accounted for Cumberland in Division 3 with Cabramatta undefeated for the season.

There will be little respite for these players with the 2021 pennant season scheduled to start on February 21.