In a tournament billed as ‘Expect the Unexpected’, the unexpected happened to Martin Kaymer while Rory McIlroy settled for his expected second place finish in the Abu Dhabi HSBC Championship.

Kaymer let slip a 10-stroke leading cushion after just four holes of the final round to hand victory to 22-year old Frenchman Gary Stal, a player ranked 357th in the world and prior to Abu Dhabi had never finished higher than fifth and that was just a week ago in South Africa. 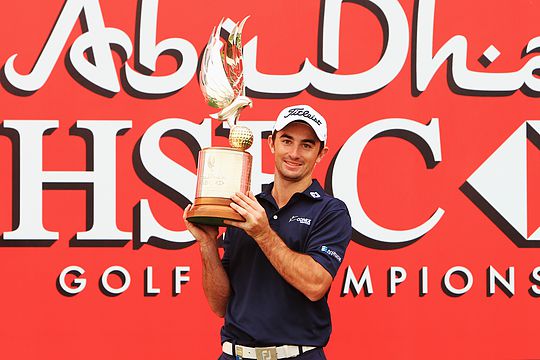 Stal recorded a last day 65 for a 19-under par tally while McIlroy, who birdied the last from a greenside bunker, signed for a 66 and an 18-under par to also record a fourth second place finish in his past five appearances in the UAE capital.

The double Major winning Kaymer, looking to win the event for the fourth time, was left shell-shocked when he proceeded to double the ninth hole and take triple at 13 on route to a 75 for third place at 17-under par.

“I am surprised, a little shocked and I don’t really know how to put it into words,” he said. “It was very, very surprising today. I started off well and hit a couple bad tee shots and cost me double‑bogey and a triple‑bogey.”

McIlroy, like Stal, went into the final day trailing eight shots behind Kaymer and for all intents and purposes was staring at finishing runner-up.

“I was told on the 15th tee that Martin had made triple on 13 so I knew with a good finish, you never know what could happen,” he said.

“I was pretty aware of what was happening the last sort of four or five holes, so I knew I was in there with a chance.”

“But then I have to say going out today, my goal today was to finish second. I didn’t think I was going to get close to winning the golf tournament. I think Martin was ten ahead at one point.”

“You then starting thinking from there, there’s only one winner, but just shows you, funny things can happen in this game. If you just sort of plug away and stay patient, your time will come I guess. But just a little too late for me today.”

After his round McIlroy was glued to TV coverage up until Stal putted up to tap-in distance for his winning par.

“I seems like at the moment I am always the bridesmaid,” said McIlroy.

McIlroy will head north to Dubai for a week’s practice ahead of teeing up next Sunday (January 25th) in the Abu Dhabi Invitational, a one-day Pro-Am format on the Yas Links course.

“I played a social round on Yas Links last year when we were here, so I might finally get my first win here in Abu Dhabi next week,” he said smiling.

“But looking back it’s been a great week to see where my game is and to know what I need to work on going forward, so it’s a good performance to finish 18-under par.

“I posted some good scores with yesterday a little disappointing but overall it’s a good start to the season.

“And ball-striking wise it’s been a great week. It’s been a really comfortable week and better than I thought given I had not touched a club for a month.”

McIlroy’s effort earning him €253,198 and sees him go straight in at ninth on the Race to Dubai.