American Angela Stanford ended her long wait for a first major title when her 3-under 68 was enough to win the Evian Championship by one shot Sunday after overnight Amy Olson made double-bogey on the 18th in dramatic scenes of a major.

Stanford, who won the last of her five LPGA Tour titles in 2012, was ecstatic with her victory which earned her a $577,500 check for making her 14th career top-10 finish in majors.

With her one-stroke victory at the Evian Championship, Stanford, who turns 41 in November, secured her elusive major title. It came after 18 years playing on the LPGA Tour, winning five times and racking up 94 top-10 finishes in 436th career starts.

“I did a bunch of stupid stuff, but deep down I’m a fighter, I’m a grinder, and I’ve always been that,” said Stanford (Titleist Pro V1x) following Sunday’s victory. 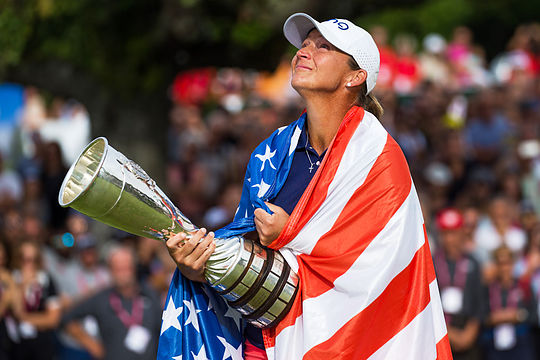 “I’m grateful. And so happy for everybody at home, everybody that’s cheered for me and never gave up on me. It’s the one thing I couldn’t get my hands on [a Major]. I’m not letting go now.”

The previous golfer, male or female to have similar stats was Sergio Garcia. When Garcia won the 2017 Masters for his first major championship win, he did so in his 74th major championship start. That mark surpassed Tom Kite, who won the 1992 US Open for his only major win in his 73rd major start.

Olson, who ended the tournament in disappointment after being outright or joint leader all day briefly with Stanford with four holes to play, carded a 74 to fall into a four-way tie for second place with fellow Americans Austin Ernst, Mo Martin and Sei Young Kim.

Australia’s Katherine Kirk finished in a share of 10th to be the best of the Aussies with Minjee Lee finishing in a tie for 16th.