Stark finally gets her ‘W’ at NSW Women’s Open

Over the past month, Maja Stark has finished runner-up on two occasions. On Sunday she wasn’t going to let it happen again.

The Swede fired a final round 66 at the Women’s NSW Open at Coolangatta Tweed Heads Golf Club to win by five shots on 15-under ahead of fellow countrywoman Johanna Gustavsson. 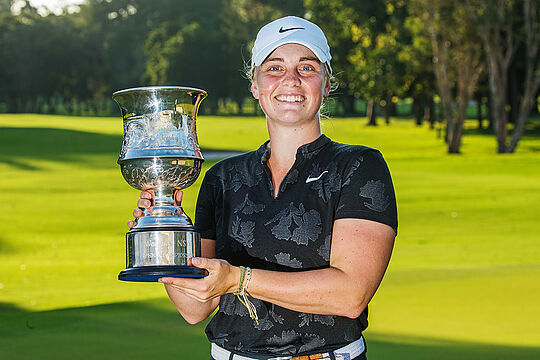 “I didn’t hit it that bad on the range but, then I come out on the course, and I was wide off the tee again like usual,” said Stark of her final round jitters.

“I got a little bit stressed out, and Johanna was playing so good, but then I calmed down a bit. I am very happy, super happy to get my third win.”

Despite starting the day with a four-shot lead, Stark didn’t have it all her own way. Gustavsson applied the pressure with three early birdies to move within two shots of Stark at the turn.

However, Gustavsson’s charge came to a sudden end on the way home with three consecutive bogeys from the 14th hole putting an end to any thoughts of a victory for the 29-year-old, who is still searching for her first LET win after a decade on tour.

Queensland’s Cassie Porter finished the best of the Australians in a share of 4th place on 8-under alongside Scotland’s Michele Thomson.

15-year-old amateur Sarah Hammett impressed again with a final round 5-under 67 leaving her in a share of 8th place and top of the amateur field. The Queenslander continues what has been a superb run of form having won five tournaments in the past year alone including the NSW Amateur.

The Women’s NSW Open was the final tournament of the WPGA Tour season with play continuing in Spain this week for the Ladies European Tour at the €300,000 Comunidad De Madrid Ladies Open.