Will Starkey from Glenelg Golf Club has claimed the 2015 SA Junior Amateur Championship title with a thrilling sudden death playoff win against the ACT’s Josh Armstrong at Blackwood Golf Club in South Australia.

The win was Starkey’s first major victory with the 18-year-old a product of the Glenelg golf club’s development program which has been in operation for a number of years and is continuing to produce stellar players like Starkey, Ben Layton, Lachlan Barker and Liam Kennewell, all promising juniors. 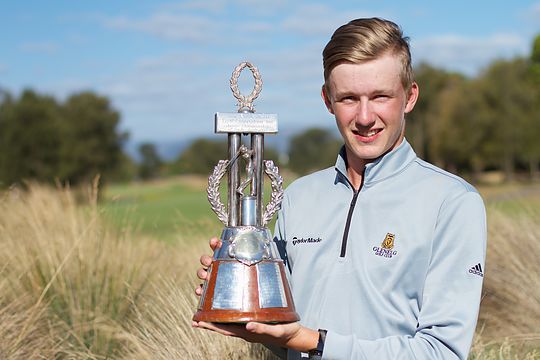 The finish might not have been what Starkey wanted, closing with a final round 81 after a double on the second hole and some closing double bogeys over the back nine – after Armstrong fired a closing 4-over-par 76 – yet on the first playoff hole Starkey’s putter delivered the winning shot.

“I’ve been working hard on my game over the last 12-18 months and I am finally starting to reap the benefits of all the work I have been putting in,” said Starkey after his victory.

“I’d like to thank my parents for supporting me constantly, the Glenelg Golf Club Foundation for the opportunities I’ve been provided with and the pro shop staff, especially my coach Gareth Jones, for his guidance over the past few years.”

Starkey turned 18 a few days after the championship, so winning his State Junior title was a fitting way to round out his junior career, with the victory hopefully the platform to go on to major wins in the amateur ranks.

Starkey recently competed in the NSW Junior championship at Wollongong where he recorded at top-15 finish. Now he’s ready to compete in the major amateur series throughout Australia and with his first “W” under his belt, is confident moving forward.

“It’s been a great run and the win was an awesome way to cap off my Junior career. Hopefully it’s a sign of things to come.”

Starkey’s achievements again show the benefits of clubs investing in their young talent.

The Glenelg Golf Club Foundation has focussed on funding the ongoing development, training and promotion of Junior golf with proceeds raised through the Foundation used to send their juniors interstate not only to State titles, but also on golfing experiences and to watch Australasian Tour events such as the Australian Masters.