Ed Stedman has won the 2015 PGA Tour of Australasia Qualifying School being played at Victoria Golf Club. Stedman fired rounds of 72, 66, 71 and 70 for a tournament total of 9-under 279.

Birdies at both the 17th and 18th holes ensured that Stedman won Qualifying School and earned the highest category on offer. 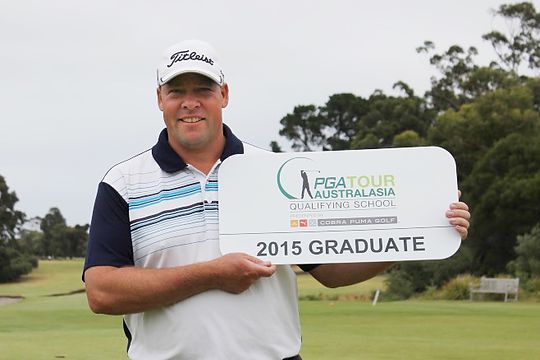 Category 8(a) will provide Stedman with starts in all PGA Tour of Australasia tournaments, giving him the strongest chance of retaining his card for 2016.

“It’s a good category, but not only that it’s good for the confidence too,” said Stedman.

“It makes me feel good about myself and it’s a nice fresh start to the year.”

“For the last few years I have been trying to keep my card playing the smaller events, it’s quite difficult if you don’t play the big ones.”

“This provides me a great opportunity to play the big ones at the end of the year.”

Impressed with his playing over the four days, Stedman is ready to tee off the season when the Oates Vic Open gets underway at 13th Beach Golf Links from 5-8 February.

“It’s always good to get it done in regulation play, save some time; I have a long drive ahead of me,” added Stedman who lives in New South Wales.

“Overall the week was really good; it was probably the best I have ever putted over a four round stretch.”

“I have been doing some new stuff with my coach so hopefully the putter stays warm for the next few months, we will see what happens.”

Finishing runner-up, Todd Sinnott also earned his Tour card but is yet to make a decision as to when he will turn Professional.

“It’s very exciting, it sets me up a little bit now,” said Sinnott.

“Before this week we had plans but you need to get your card to make those plans happen so it’s good that I have set myself up.”

“I’m not 100% sure, I will probably go Pro pretty soon but I’m not sure exactly when. I need to assess all my options.”

In order to take up his place on the PGA Tour of Australasia and utilise his card, Sinnott will need to turn Professional but can do this at any stage throughout the 2015 season.

The other highlight of the day was Charles Wright’s hole-in-one on the 178 metre par-3 16th hole at Victoria Golf Club using his 6-iron.

Wright earned the 18th card with a tournament total of 1-under 287.