Brendan Steele put behind events twelve months ago to win the Safeway Open for his first PGA Tour victory in more than five years.

One year after losing a 54-hole lead with a 40 on the back nine, Steele rallied from a four-shot deficit to close with three straight birdies for a 7-under 65, giving him a one-shot victory over Patton Kizzire. 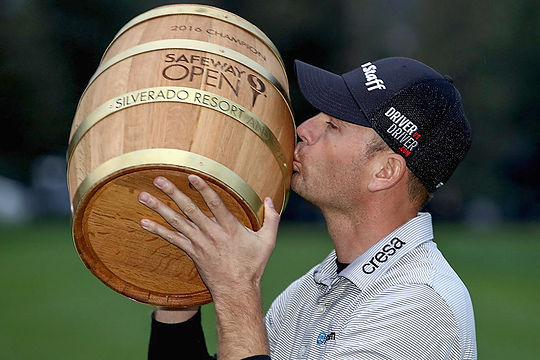 Steele, who finished at 18-under, won for the first time in 141 starts on the PGA Tour dating back to the Texas Open in his rookie season.

The victory gets him into the Masters for only the second time, along with a spot in the Tournament of Champions at Kapalua at the start of next year.

The victory was timely also as it got rid of the demons from last year’s meltdown when Steele made five bogeys in a six-hole stretch on the back nine after being the 54-hole leader with a final round 76 dropping him to a tie for 17th position.

“You don’t often get that chance in life to really redeem yourself in the same way at the same place, and to basically do just the opposite,” Steele said.

Steele had only one blemish on his scorecard for the final round, closing his round with three straight birdies to earn the victory.

Steele, 33, turned professional in 2005 and played on the Golden State Tour winning four times. In 2006 and 2007 he played on the Canadian Tour where his best finish was second at the 2006 Telus Edmonton Open.

England’s Paul Casey claimed his fourth successive top-four finish without victory finishing in a tie for 3rd position on 16-under with Americans Michael Kim, Johnson Wagner and Scott Piercy.

John Senden, Brett Drewitt and Cameron Smith were the best of the Australians sharing 35th position at 8-under.

Drewitt earned a nice cheque of US$23,516 in his PGA Tour debut after playing in the Web.com Tour Finals where he recorded a T5 at the Nationwide Children’s Hospital Championship to secure his PGA Tour card for the 2016-17 season.

This was a fantastic result for Drewitt, who in 2014 played on PGA Tour China, winning the United Investment Real Estate Wuhan Open and finishing third on the Order of Merit.

Undeterred and committed to playing in the US, Drewitt improved his status for 2016 via the Web.com Tour Qualifying Tournament, where he finished tied for 21st.

The remaining Aussies to make the cut this week included Greg Chalmers and Aaron Baddeley yet both finished well down the leaderboard. Rod Pampling, Geoff Ogilvy and Steven Bowditch missed the 3-under-par cut, with Bowditch bringing up the tail having opened with rounds of 78-79.