Steele makes it two in a row at Safeway Open

American Brendan Steele finished with a three-under-par 69 to win the Safeway Open for the second year in succession in the first event of the 2017-18 PGA Tour wraparound season.

The 34-year-old, who began the final round in Napa two shots off the lead, had five birdies in the first 14 holes and defeated fellow countryman Tony Finau by two strokes. Phil Mickelson and Chesson Hadley finished three shots behind. Steele finished at 14-under for his third PGA Tour title. He also won the 2011 Valero Texas Open.

“I’m getting pretty spoiled winning the first event of the year twice,” said Steele whose last top-10 on the PGA Tour was in the Players Championship back in May. “This place is so great to me. I feel so comfortable here and it’s been a great run.”

Steele recorded his first win in a PGA Tour event at the 2011 Valero Texas Open but had to wait another five years to win his next title, which came at the 2016 Safeway Open

He also won the Nationwide Tour Championship in 2010, which moved him from 30th to 6th on the money list that year to earn a PGA Tour card for the 2011 season.

Mickelson fired a 70 to finish at 12-under, yet showed plenty of game despite struggling with the driver.

“I had a good time today,” said Mickelson. “It was fun to be in the mix, it was fun to have a chance.”

“It was very difficult conditions but I enjoy that challenge. This course played totally different with the firm greens and the wind and some of the high pin placements were tough to get to.” 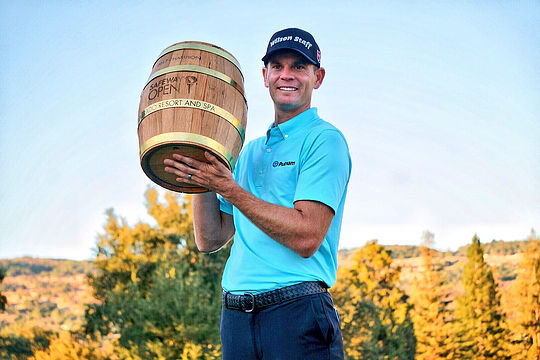 Mickelson’s winless streak now moves to 91 starts (his last victory was the 2013 Open Championship) following a week in which he seriously contended at the Safeway Open, but fell short coming down the closing stretch.

The five time major winner Mickelson recorded his first top-three since last year’s epic duel against Henrik Stenson at The Open when played at Royal Troon, yet the focus remains on when Mickelson will win again.

Interestingly even Tiger Woods has won a tournament more recently than Mickelson. It was the 2013 WGC-Bridgestone Invitational, two weeks after Mickelson won his last event at The Open.

Matt Jones was the best of the Australians finishing in a tie for 43rd position, a final round 77 dropping him twenty-six places to finish at 3-under. Aaron Baddeley, Greg Chalmers and Steve Allan missed the 1-under cut mark.

The PGA Tour now moves to Malaysia for the CIMB Classic starting 12 October in a revamped schedule before a new event in Korea at THE CJ CUP @ Nine Bridges the week after.

It was at the CIMB Classic last year where Justin Thomas’ career kicked off with a victory there before heading into 2017 where he enjoyed a breakthrough year on Tour.