Defending British Open champion Henrik Stenson admits he will enjoy watching one of the great final rounds in major championship golf for many years to come.

Yet the talented Swede also admitted his Open championship win also gave him a new respect for runner-up Phil Mickelson and the brand of golf the two played over those final two days, which captivated the golfing world. 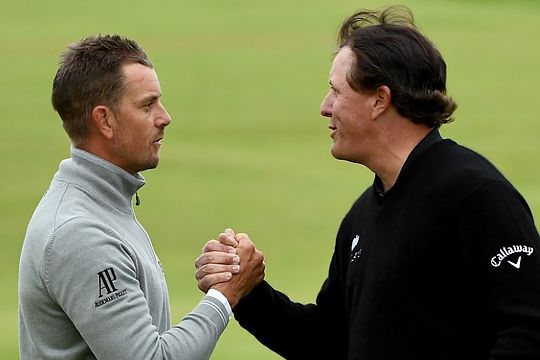 Of course we all know Stenson shot a stunning 63 on the final day – with 10 birdies – to deny Mickelson his second Open championship and his sixth major.

There have been the inevitable comparisons to that famous Duel In The Sun between Jack Nicklaus and Tom Watson 40 years earlier at Turnberry.

Certainly Stenson and Mickelson turned the 145th Open into a two-man dogfight with few even noticing that it was American J.B. Holmes who finished a battling third.

“I spoke with Phil at the following tournament, which was the PGA Championship,” said Stenson.

“He was very gracious in defeat but it takes two to tango and I probably wouldn’t have shot 20-under and put a new championship record in the books if it wasn’t for him pushing me all the way.”

“He’s been on the winning side and on the losing side before, as we all have throughout the years. I mean, it’s not something that I would sit down and relive those moments with Phil.”

“I don’t think he would be interested in that and I wouldn’t even try and do that. But we just have a lot of respect for each other and for each other’s games.”

“Phil’s been one of the best players in the world for 25 years, so it was a big thing for me to beat him one-on-one like that.”

Stenson said he felt Mickelson probably would have been able to take defeat a little easier because he had played so well.

“I think he said that in his remarks afterwards…that it’s the best he’s ever played without winning,” said Stenson.

“The times that you end up losing and you make a mistake, you three-putt the last hole or something like that, those are the ones that really hurt.”

“But he played a great final round, which would have been good enough to win I guess 99 times out of 100.”