(Greensboro, NC:) Henrik Stenson celebrated his 21st pro career victory in becoming the winningest Swede on the PGA Tour and setting a new tournament record in capturing the Wyndham Championship.

Stenson, 41, birdied four of his closing six holes and as he had done a day earlier in signing for a six-under 64 to win by a shot with a 22-under par tally. 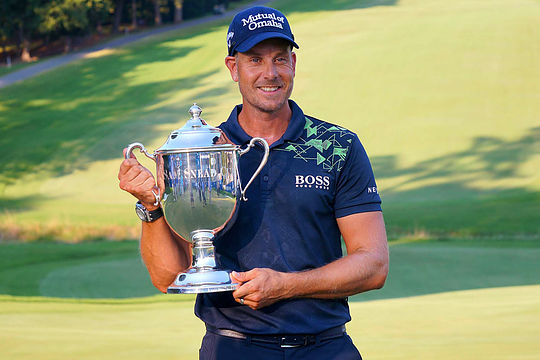 The win is Stenson’s first since his Open Championship victory last year and his first Stateside in four years.

It is also Stenson’s sixth taste of success on the PGA Tour and one more than compatriots Jesper Parenik and Carl Petterson, who are also previous Wyndham Championship winners.

“Jesper and Carl and myself had five wins each before this week so that feels good to inch ahead and get that sixth win,” he said.

“It’s a funny game. I played some fairly solid golf in the last couple of tournaments.”

“I played at The Open and Bridgestone and last week in Charlotte but you never know when a win is around the corner. I obviously did enough good things this week to produce that 22-under and yeah, delighted, pick up that momentum and confidence that a win gives you.”

Stenson went into the last round leading by one but found himself trailing when towering Texan Ollie Schniederjans birdied the 15th.

The World No. 9 ranked Stenson rallied to move to 22-under with back-to-back birdies at 16 and 17 before some concern when his drive was left at the downhill last.

Stenson played his second to 33-feet just off the green behind the flag from where he calmly putted to three-feet for the win.

And for the first time in his career, Stenson won without packing a driver into his bag.

“It was a very good decision (smiling) to leave my driver out of the bag, so I’m delighted,” he said.

“I don’t think my Callaway Epic Driver is delighted as it has been standing in the shadows in my locker all week. He’s a little anxious to get out and start getting some air time I think next week already.”

In lieu of using a driver, Stenson carried four wedges into the event.

Schniederjans (64) finished second at 21-under par and three clear of former US Open winner, Webb Simpson.

However, there was bitter disappointment for Ireland’s Shane Lowry who produced a closing day 67 to share seventh place at 15-under par.

Lowry needed to finish tied sixth at worst to qualify for this week’s FedEx Cup Play-Offs.

However, and after finding a fairway divot with his drive down the last, Lowry ended the regular season 127th on the money list and two places shy of breaking into the top-125 who now head to Long Island for Thursday’s start to the FedExCup Playoffs.

Lowry will retain his place on the 2017/18 PGA Tour by virtue of his thee-year exemption he won by capturing the 2016 WGC – Bridgestone Invitational.